Outside the Jama Masjid, the Delhi Police put up signboards requesting people to wear masks and ensure physical distancing while offering namaaz 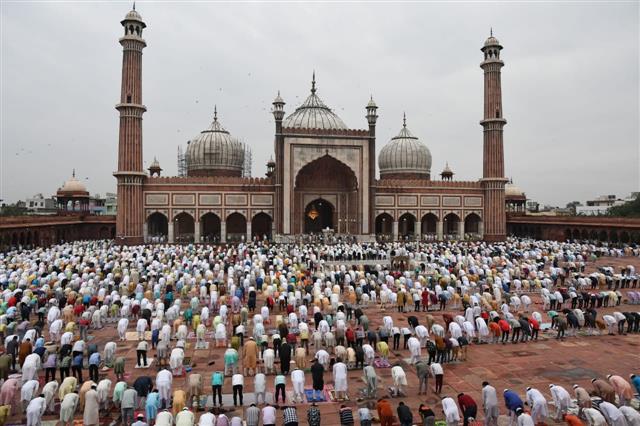 The festive spirit of Eid al-Adha was subdued in the national capital on Saturday with the coronavirus pandemic badly hitting livestock sale for the festival of sacrifice and restricting many people to their homes.

Despite just around 10,000 active COVID-19 cases in Delhi — far better than was feared — and easing of lockdown restrictions, many faithful preferred offering ‘namaaz’ at their homes than visiting mosques.

Those who offered prayers at mosques said a fewer number of people had turned up there, and the mood was not as ebullient as previous years.

Outside the Jama Masjid, the Delhi Police put up signboards requesting people to wear masks and ensure physical distancing while offering namaaz.

Imtiaz Ahmad, who offered prayers at the mosque, said the turnout was way less than before when the crowd would spill on the streets too. People wore masks, carried their own mats and avoided hugging each other, he said.

Yameen Ansari, a resident of Jamia Nagar who offered prayers at Jamaat e-Islami Hind Markaz in Azu Fazal Enclave, said though some people stepped out of their homes, unlike Eid Ul Fitr in May, the festive spirit was dim.

“People could step out as things are under control in Delhi. Still, they were not as cheerful as before,” he said, adding friends and family have been avoiding gatherings on the festival.

Abdul Noor Shibli, a journalist, who offered prayers at the Jamaat e-Islami Hind Markaz, said it was the first time in four months that he went to a mosque. He said the mosque administration had deployed volunteers for thermal screening at the entry gates.

“People wore masks and brought their own mats. Stickers were pasted on the floor to help them maintain distance,” he said, adding the turnout was half of what it used to be during festivals in normal times.

Umar Sheikh Mohammad, the president of the Nizamuddin West Resident Welfare Association, said he offered prayers in a nearby mosque but the crowd was thin. The 51-year-old businessman, however, said offering ‘qurbani’ was not that easy as business was down.

COVID-19 has hit businesses. People who could afford four goats till last year didn’t have enough money to buy even one this Eid, he said, adding: “It was also not easy to purchase a goat and bring it home, as there are restrictions on the sale of livestock due to the pandemic.”

“A large number of people could not buy a sacrificial animal because the pandemic-induced economic crisis has rendered them jobless,” Mohammad said.

Mohammad Izhaar, a goat seller at the famous sarpine market near Jama Masjid, said Bakr Eid has been insipid. Every year he sold around 15 to 20 goats on Eid al-Adha. This year, he has sold only four, that too at a loss.

“It (the pandemic) has sucked the life out of us,” he said woefully. In a world without the coronavirus, sale of goats would have fetched Rs 60,000 to Rs 70,000, but this year they were sold at half the price, Izhaar said. PTI