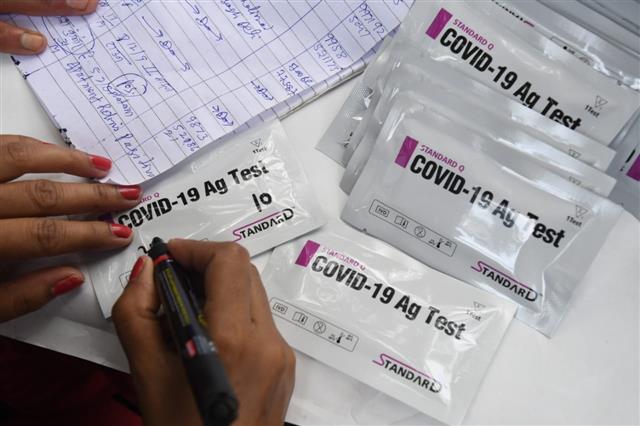 However, the testing of samples collected through home visit will cost Rs 1,200.  Tribune file

The Arvind Kejriwal government on Monday ordered all private laboratories to reduce the price of RT-PCR tests in the national capital to Rs 800 from Rs 2,400.

According to an order issued by the health department, private laboratories have been asked to charge Rs 800 for testing “samples collected by government teams and collected from collection sites by private sector labs as requisitioned by districts and hospitals”.

However, the testing of samples collected through home visit will cost Rs 1,200.

All labs and hospitals have also been asked to display the revised rates at a prominent place within 24 hours.

The private laboratories have also been asked to process samples, share the reports with the client (government or individual) and update all reports on the Indian Council of Medical Research (ICMR) portal within 24 hours of collection of samples.

Health Minister Satyendar Jain had earlier said that labs were finding it difficult to release the results of all tests within a day.

Earlier in the day, the chief minister said that he had issued directives to reduce the price of the RT-PCR test in the national capital, saying it will help those going to private labs for COVID-19 tests. “I have directed that the rates of RT PCR tests be reduced in Delhi. Whereas tests are being conducted free of cost in govt establishments, however this will help those who get their tests done in pvt labs,” Kejriwal tweeted.

Jain in reply to the chief minister’s tweet said orders for this will be issued immediately. PTI