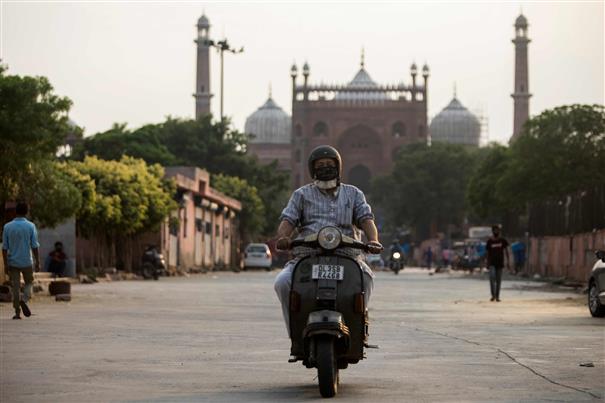 A man rides his bike along a street outside the Jama Masjid after the government eased a nationwide lockdown in the old quarters of New Delhi. AFP

The Delhi Government has received more than 7.5 lakh suggestions from people on the opening of the Delhi borders.

Chief Minister Arvind Kejriwal is likely to hold a meeting with experts on Saturday.

Seeking suggestions from the people through WhatsApp  8800007722, email delhicm.suggestions@gmail.com and call on 1031, CM Kejriwal had said that based on these suggestions, the Delhi Government will decide on whether to open borders to allow inflow of people from other states for medical treatment and other services.

The move to seek suggestions from the public by the Delhi Government received an overwhelming response.

The CM had said that people from all over the country come to Delhi in search of better medical treatment. All the beds will be occupied in just 2-3 days if we have an influx of patients from across the country, he said.

He had also announced the sealing of the borders for a week starting Monday, with essential services remaining functional and government officers continuing to travel on their identity cards.