Workers, under the watch of police personnel, on Monday were seen hooking iron rods between two rows of cement barriers on a flank of the main highway at the Singhu border 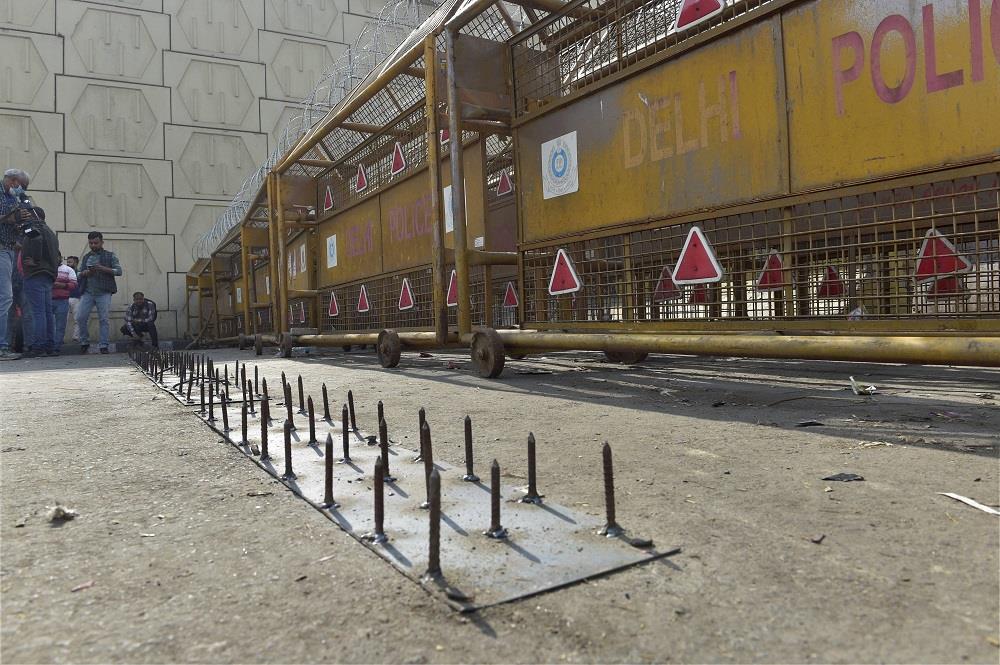 Iron spikes placed by Delhi Police at Ghazipur border to keep farmers from entering the national capital during their ongoing protest against the new farm laws, in New Delhi on Tuesday. PTI Photo

Multi-layered security has been stepped up with the deployment of extra personnel and strengthening of barricades near the farmers’ protest sites at Delhi’s borders, and thereby turning them into fortresses.

Besides additional deployment of forces, the Delhi Police have cemented nails near barricades at Ghazipur (Delhi-Ghaziabad) and Tikri (Delhi-Rohtak) borders. Police have also heavily barricaded the Ghazipur border. Barbed wire and cement barricades have been planted on the roads to restrict the movement of farmers.

Workers, under the watch of police personnel, on Monday were seen hooking iron rods between two rows of cement barriers on a flank of the main highway at the Singhu border to further restrict the movement of protesters agitating against the Centre’s new farm laws at the site.

Another portion of the highway at the Delhi-Haryana border is practically blocked now as a makeshift cement wall has come up there. Drones have also been deployed to monitor the protesters.

Taking to Twitter, the Delhi Traffic Police alerted commuters about the closure of borders and suggested alternative roads for travel.

According to the police, Delhi-Ghazipur border remains closed for traffic due to the farmers’ protests. The commuters were suggested to take alternate routes via Anad Vihar, Chilla, DND, Apsara, bhopra and Loni borders, the police said

Security arrangements continue to be strengthened at the Delhi-UP border site, which is galvanising farmers from Rajasthan, Uttar Pradesh and Uttarakhand, days after an emotional appeal by Bharatiya Kisan Union leader Rakesh Tikait.