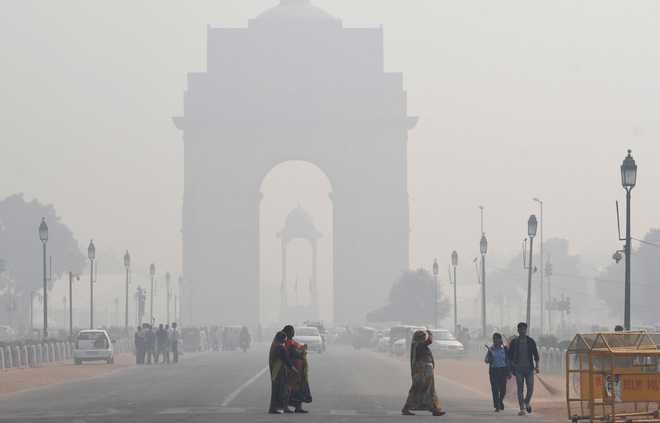 The wind speed will continue to be favourable for dispersion of pollutants over the next three to four days, according to IMD. — File photo

Delhi's air quality was recorded in the “moderate” category on Wednesday morning, while government agencies said no significant change is likely in the next three to four days.

The mercury is also predicted to dip to single digits by Saturday. On Wednesday morning, it was 10.6 degrees Celsius, two notches below normal, according to the India Meteorological Department.

The air quality index (AQI) stood at 414, in the “severe” category, on Diwali day. But rain and high-velocity winds under the influence of a Wester Disturbance brought relief from high pollution levels.

The central government's Air Quality Early Warning System for Delhi said Delhi-NCR's air quality is likely to remain in the “moderate” and the lower end of the “poor” category on Thursday and Friday.

On Wednesday, the prominent surface wind direction will be northwesterly and the maximum wind speed will be 10 kmph, it said.

The wind speed will continue to be favourable for dispersion of pollutants over the next three to four days, according to IMD.

Delhi's ventilation index—a product of mixing depth and average wind speed—will be around 5,000 m2/s on Wednesday and 7,500 m2/s on Thursday.

The Air Quality Early Warning System for Delhi also said very few farm fires were observed over Punjab and Haryana on Tuesday and “their impact on air quality of Delhi is likely to be negligible”.

The IMD said the minimum temperature in Delhi is predicted to drop to 9 degrees Celsius by Saturday, as cold winds have started blowing from hilly regions, which have witnessed a fresh bout of snowfall.

The minimum temperature this month, barring on November 16, has remained 2-3 degree Celsius below normal in the absence of a cloud cover, according to IMD officials. — PTI