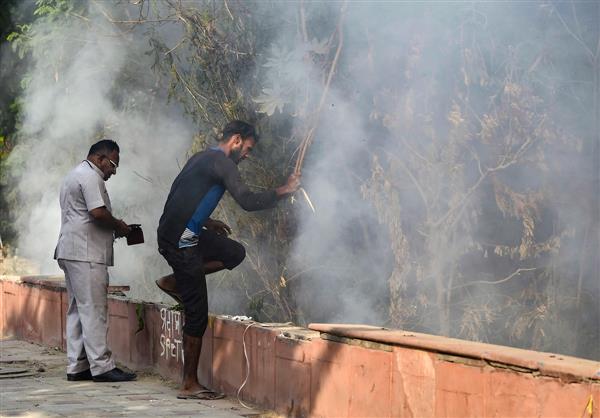 Delhi's air quality remained “very poor” on Thursday, and it is likely to remain so for the next two days.PTI photo

Delhi's air quality remained “very poor” on Thursday, and it is likely to remain so for the next two days.

The predominant wind direction will be northerly and the maximum wind speed 6 kmph on Thursday, according to the India Meteorological Department.

The minimum temperature was 8.2 degrees Celsius on Thursday and the maximum is expected to settle around 26 degrees Celsius, the weather department said.

The minimum temperature this season has remained 2-3 degree Celsius below normal in the absence of a cloud cover on most days, according to IMD officials.

Calm winds and low temperatures trap pollutants close to the ground, while favourable wind speed helps in their dispersion.   The central government's Air Quality Early Warning System for Delhi said air quality is likely to remain in the "very poor" category till Saturday.

There is a possibility of the air quality reaching the "severe" category between December 4 and December 7, it had said earlier.

The city's ventilation index -- a product of mixing depth and average wind speed – is likely to be 3,000 m2/s on Thursday.

A ventilation index lower than 6,000 sqm/second, with the average wind speed less than 10 kmph, is unfavourable for dispersal of pollutants.PTI