he mercury is set to drop further 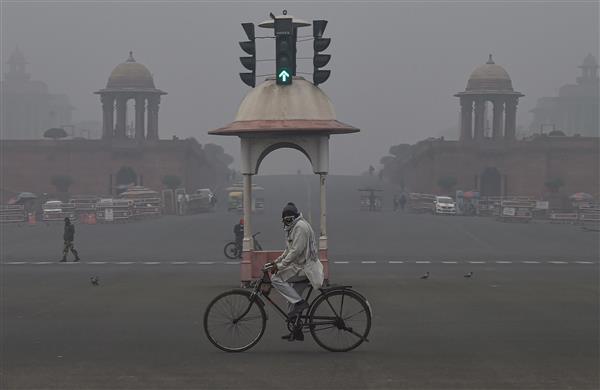 A cyclist rides through fog on a winter morning at Rajpath in New Delhi on January 12, 2021. — PTI

Delhi's minimum temperature dropped to 4.3 degrees Celsius on Tuesday, and is likely to dip further in the coming days, the India Meteorological Department (IMD) said.

The Safdarjung Observatory, which provides representative data for the city, recorded a minimum of 4.3 degrees Celsius, three notches below normal, an IMD official said.

Delhi had been registering above normal minimum temperatures till Monday, as a cloud cover persisted over the city under the influence of successive Western Disturbances.

The cloud cover over the national capital has prevented a steep decline in the minimum temperature so far, the IMD official said.  Clouds trap some of the outgoing infrared radiation and radiate it back downward, warming the ground.

However, the minimum temperature has started declining with the commencement of northwesterly winds from snow-capped mountains towards the plains starting Saturday, the official said.

The mercury is set to drop further.

Moderate to dense fog is also predicted over the capital on Thursday and Friday, the IMD official said. — PTI