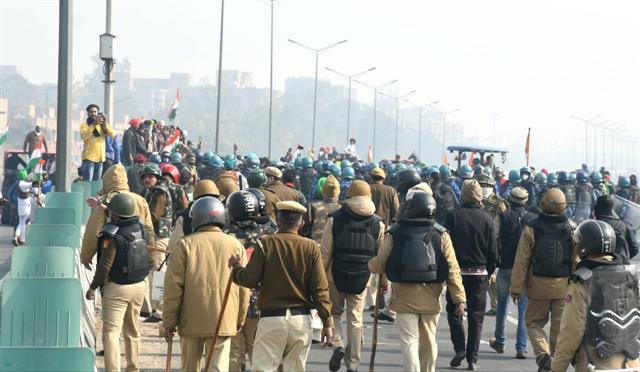 Farmers break the police barricades at the Ghazipur border as move towards Akshardham during their tractor rally on Republic Day in New Delhi on Tuesday. Tribune Photo: Manas Ranjan

The police also asked the farmers to head back to their pre-decided routes for the tractor rally parade.

“We request to the protesting farmers to not take law in their hands and maintain peace,” Additional PRO Anil Mittal said.

Police on Tuesday fired tear gas shells and lathicharged farmers when they clashed with the force in parts of city, including the ITO, after the tractor parade deviated from the permitted route in an attempt to move towards Rajpath, the heart of the national capital.

The Delhi Police had given permission to farmers protesting the three farm laws to hold their tractor parade on selected routes only after the official Republic Day parade on the Rajpath concludes.

However, chaos ensued as the farmers were adamant of heading towards central Delhi.

The farmers who began their march from different border points, much before the time permitted to them for their tractor parade, reached ITO in Central Delhi and tried to move towards Lutyen’s zone. The protesters, carrying sticks, clashed with police at the ITO.