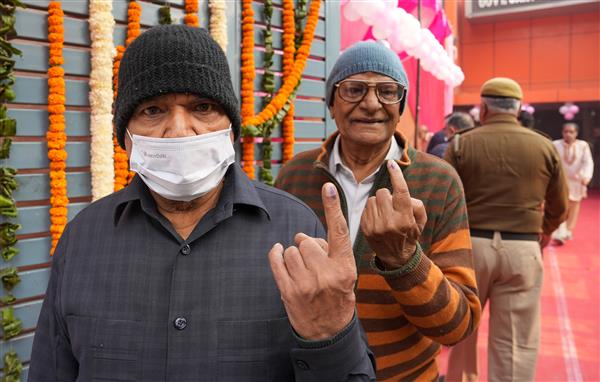 Voters show their fingers marked with indelible ink after casting their votes for the Municipal Corporation of Delhi (MCD) elections. PTI file

Three exit polls on Monday predicted a clear win for the Aam Aadmi Party in the Municipal Corporation of Delhi (MCD) polls and an end to the BJP’s 15-year rule at the civic body.

The results for the MCD polls will be declared after counting of votes on December 7. Over 50 per cent of the total 1.45 crore eligible votes were polled in the elections for the total 250 MCD wards on Sunday.

The BJP that has been ruling the civic bodies since 2007 had won 181 of the total 270 municipal wards in the 2017 civic body polls, trouncing the AAP and the Congress. The AAP won 48 wards and the Congress 30.

Earlier this year, the three municipal corporations in Delhi were unified by the Centre into MCD having 250 wards. The total number of wards was 272 under the three corporations.

Both the AAP and the BJP have fielded 250 candidates, while the Congress has 247 in the fray. The number of independents is 382.