AAP likely to win over 150 wards 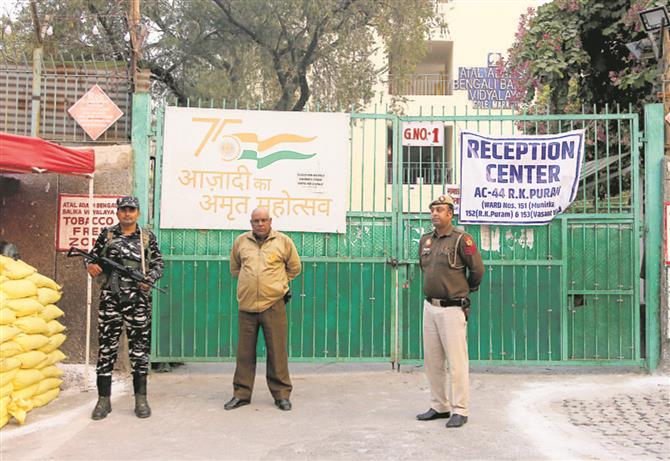 Security personnel stand guard outside a school where ballot boxes are kept in New Delhi on Monday. ANI

The AAP is likely to win 155 of the 250 wards in the MCD election, according to various exit polls.

The AAP, which has been in power in the Delhi Assembly for the second consecutive term, was distant second in the 2017 MCD election, winning only 48 seats out of 270. The BJP had won 181 seats routing the AAP and the Congress.

The AAP may get 149-171 wards, according to an exit poll by Aaj Tak. Another exit poll by Times Now shows Delhi Chief Minister Arvind Kejriwal’s party getting between 146 and 156 wards.

Meanwhile, the BJP, which was in power in the MCD from 2007 onwards, was likely to bag 69-91 wards, as per the Aaj Tak exit poll. Times Now exit poll shows BJP winning 84-94 wards. The AAP’s promise to steer a positive transformation in Delhi’s civic amenities seems to have worked.

The party had left no stone unturned to put up a break to the BJP’s 15 years winning streak with decibel campaigns by a phalanx of the AAP leaders, including ministers from Punjab.