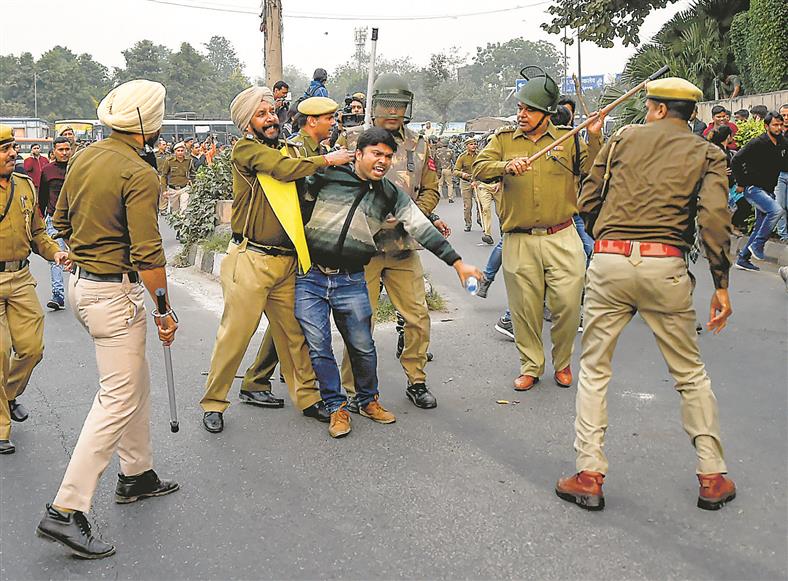 Students engage in a scuffle with cops while marching towards Rashtrapati Bhavan in New Delhi on Monday. PTI

Scores of JNU students were lathicharged by the police and several of them detained when they tried to march towards Rashtrapati Bhawan against the hostel fee hike here today.

The march threw traffic out of gear and left metro commuters stranded for hours with three central Delhi stations being closed as a precautionary measure.

Amid heavy police deployment, beginning right at the campus, the students began their march but were stopped near the Bhikaji Cama Place metro station. They tried to jump the barricades and were lathicharged by the police.

According to JNU Students Union president Aishe Ghosh, “Several students, including women, have been detained by police which brutally attacked the protesters, asking us to go back to campus. We will not budge.”

The students took to social media to share images and videos of lathicharge by police.

“Due to the demonstration, the traffic movement is affected on the road leading to Dhaula Kuan from AIIMS. The commuters should avoid the route,” the Delhi Traffic Police tweeted.

The HRD Ministry had set up a three-member committee to look into ways to restore normal functioning in the JNU and mediate between the agitating students and the administration. The panel submitted its report, but no call has been taken yet.

The students’ agitation over the hike in hostel fee escalated on November 11 when thousands of them clashed with police outside the All India Council of Technical Education (AICTE) premises, where the university’s convocation was held. The JNU’s Executive Council had then announced a partial rollback of the hike for students belonging to the BPL category and not availing any scholarships. However, the protesters dubbed it an “eyewash”. — PTI