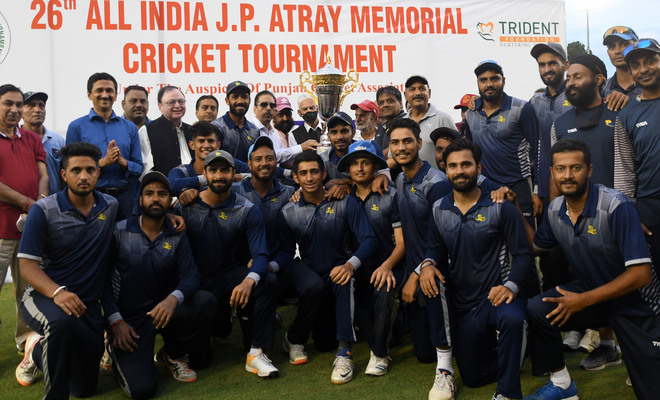 Members of the winning team pose with the trophy at IS Bindra PCA Stadium in Mohali on Sunday. Tribune photo: Vicky

The match was reduced to 20 overs a side due to rain.

HPCA had a solid beginning as Chopra and Shubham Negi put on 84 runs for the first wicket.

The duo was separated in the 12th over when Negi was stumped by Puneet Bisht off Rahul Chaudhary on 35.

Ekant Sen, who replaced Negi at the crease, made 20 runs before he was caught by Chetanya Bishnoi off Chaudhary. Chopra, meanwhile, smashed 72 off 48 balls to propel HPCA to a challenging total. He was the last wicket to fell in the HPCA innings, caught by Pradeep Malik off Pradeep Prashar.

Chaudhary (2/24) was the most successful bowler for Ranstar Club.

Needing to score 8.80 runs per over victory, Ranstar Club lost wickets at regular intervals and were all out for 100 runs in 15.2 overs.

For Ranstar Club, Sumit Verma made 36 runs, while Pradeep Malik contributed 26 runs to the chase.

Kanwar was named man of the match, while Chopra was adjudged man of the series. HPCA’s Akash Vashisht got the best bowler award and PCC’s Nehal Wadhera received the best batsman award.