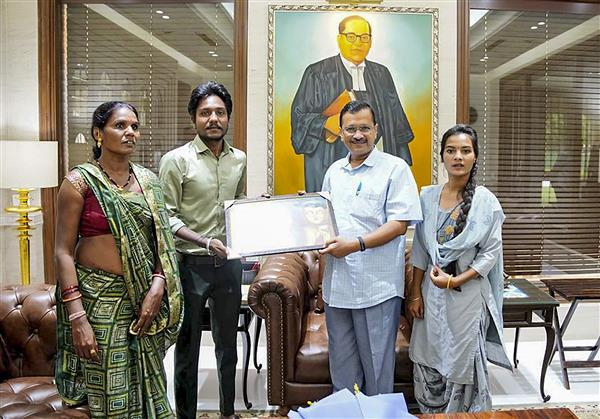 Delhi Chief Minister Arvind Kejriwal hosted a sanitation worker and his family from Gujarat over lunch at his residence here on Monday, officials said.

Opposition BJP and Congress, meanwhile, dubbed the lunch hosted for the sanitation worker from Gujarat Kejriwal, a “political stunt” and accused him of “hypocrisy” instead of taking care of Dalits living in the city.

Harsh Solanki, a sanitation worker from Gujarat, along with his family, also visited a Delhi government school and a hospital.

Solanki presented a portrait of B R Ambedkar to Kejriwal, the officials said.

During the Aam Aadmi Party’s (AAP) town hall with sanitation workers, predominantly from the Dalit community, in Gujarat’s Ahmedabad on Sunday, Solanki had invited Kejriwal to have dinner at his house.

In a statement, Kejriwal had said he would host Solanki and his family at his residence over lunch.

“It was a very happy moment for us. They sat with my family and we had lunch. I am thankful to them for coming this far to meet me,” Kejriwal told reporters.

Solanki said it was a proud moment for him to have been hosted by a political leader.

“In the last 75 years, he (Kejriwal) is the first leader to have called a Dalit for lunch. It is a big thing for me. I also saw schools and hospitals and it felt very good. I had never thought that I would be standing with the chief minister sir,” he said.

Accusing Kejriwal of “hypocrisy” BJP MLA and leader of opposition in Delhi Assembly Ramvir Singh Bidhuri charged Kejriwal is not a well-wisher of Dalits and sanitation workers.

He said even the status of Corona warrior was not extended to sanitation workers during the pandemic.

“About 82 per cent of the amount allocated for the welfare of these sanitation workers in the Delhi government budget was not spent. Now by inviting a Dalit of Gujarat to Delhi, AAP is indulging in gimmick and hypocrisy,” he charged The Kejriwal government neither considered sanitation workers as corona warriors nor released Rs one crore rupees compensation each to those who died during different waves of the COVID-19, he alleged.

Delhi Congress president Anil Kumar also termed the AAP convener’s move to invite a Dalit family from Gujarat for lunch at his residence a “political stunt” to “mislead the Dalit community.”

“Many Dalit sanitation workers serving during Covid pandemic died due to the virus in Delhi but the Kejriwal government did not honour its commitment of giving Rs 1 crore compensation to the kin of the deceased,” he claimed.

“Kejriwal was playing vote-bank politics to fool the people ahead of Assembly polls in Gujarat,” he charged.

Kejriwal hosted the sanitation worker and his family from Gujarat over lunch at his residence. The family also visited a Delhi government school and a hospital. PTI