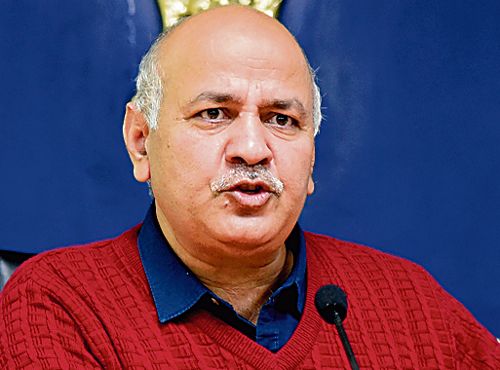 A day after Delhi Lieutenant Governor (L-G) VK Saxena pointed out the falling enrolment in government schools of the state, Deputy Chief Minister Manish Sisodia on Saturday wrote back to the L-G, asking him not to ridicule teachers and instead focus on law and order. - File photo

A day after Delhi Lieutenant Governor (L-G) VK Saxena pointed out the falling enrolment in government schools of the state, Deputy Chief Minister Manish Sisodia on Saturday wrote back to the L-G, asking him not to ridicule teachers and instead focus on law and order.

The L-G wrote the letter (to Kejriwal) with a political motive and said no work has been done in the Education Department of Delhi. I am requesting the L-G not to mock the work of our teachers. Manish Sisodia, Delhi Deputy CM

He said the L-G’s letter to Chief Minister Arvind Kejriwal on Friday was written with a political motive and his “false allegations” against the Education Department were an “insult” to the students and teachers of Delhi.

Responding to the allegations, Sisodia said, “May be, harassing us has become L-G’s political commitment, but it ill behoves him to hamper the education of children and insult the work of Delhi teachers. The figures quoted by the L-G are false. Contrary to his claims, 14.66 lakh children were enrolled in Delhi schools in 2015-16. It increased to 18 lakh this year.”

He further added the pass percentage had increased from 75 to 80 to 99.6, with several students scoring 95-100 per cent.

“Children of rickshaw-pullers and domestic helps are becoming doctors and engineers, but the L-G is out to insult their hard work. Echoes of the Delhi model have already reached the White House,” said Sisodia in the letter to the L-G.

Sisodia said, “I am not saying that everything is excellent in government schools of Delhi. There are several shortcomings. We value your criticism. But I request you with folded hands, you can say whatever you want to say politically, but do not try to undermine the hard work of the teachers.”