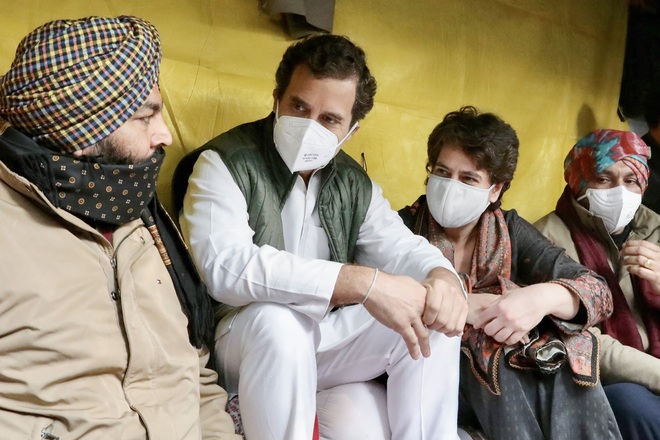 Rahul Gandhi and Priyanka Gandhi with protesting Congress leaders from Punjab at Jantar Mantar in New Delhi on Friday. PTI

Congress leaders Rahul Gandhi and Priyanka Gandhi Vadra on Friday led protests outside the Delhi Raj Niwas in solidarity with the agitating farmers and demanded repeal of farm laws.

As the Congress marked ‘Kisan Adhikar Divas’ by gheraoing Governor houses across India, several of party leaders offered arrests, including in Delhi where Congress leaders from Punjab were detained and kept at the Mandir Marg police station for long hours.

Congress MPs from Punjab Ravneet Singh Bittu, Gurjeet Aujla, JS Gill and MLA Kubir Jira were among those detained from Jantar Mantar, where they have been sitting in solidarity with the farmers for 41 days.

The Central farm laws have been drafted to aid corporates like Ambani and Adani. The government had earlier attempted to usurp farm land by bringing in the new land acquisition Act. The Congress foiled that attempt. —Rahul Gandhi, Congress leader

Priyanka also joined the protesting Congress leaders from Punjab at Jantar Mantar and said the party would not withdraw until the laws were repealed.

“We will stand with the farmers till the black laws are repealed…the government will have to budge,” said Rahul. “The laws are meant not to help farmers, but to destroy them. They have been drafted to aid corporates like Ambani and Adani. The Congress will continue to stand with the farmers. The government had earlier attempted to usurp farm lands by bringing the new land acquisition Act. The Congress frustrated that attempt. Now the BJP and their corporate friends have again made a bid to attack the farmers and we will again stand against the government,” he said before going to Jantar Mantar, where he said the Prime Minister did not respect the farmers and wanted to tire out the protesters in battle with the Centre.

AICC general secretary KV Venugopal later said water cannons were used against Congress workers in Chandigarh while they were trying to gherao the Punjab Raj Bhawan. Uttar Pradesh leaders of the party were detained when they were trying to march towards Raj Bhawan in Lucknow. “Haryana leaders, including state chief Kumari Selja, held a protest march and courted arrest. Reports of protests also came in from Bihar, West Bengal, Jharkhand, Odisha, Chhattisgarh and Rajasthan,” Venugopal said.