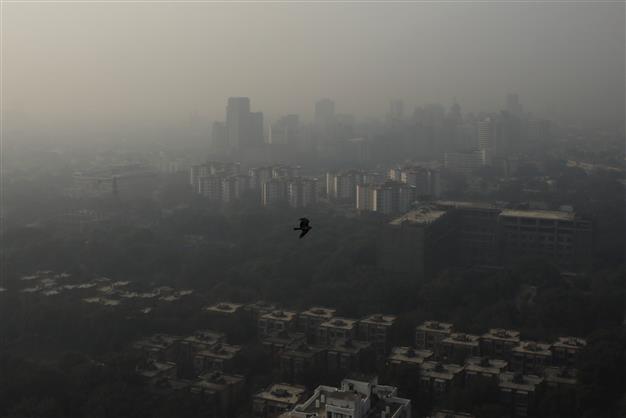 A bird flies over buildings shrouded in smog in New Delhi on October 27, 2020. REUTERS

Pollution levels reduced marginally in the national capital on Tuesday morning but the air quality was still recorded in the “very poor” category.

A senior scientist at the India Meteorological Department said the air quality index (AQI) was likely to improve with the wind speed picking up.

Calm winds and low temperatures trap pollutants close to the ground while favourable wind speed help in their dispersion.

According to the Ministry of Earth Sciences’ air quality monitor, SAFAR, the wind direction and speed were favourable for the transport of pollutants from farm fires in Punjab, Haryana and neighbouring regions.

It, however, said an improvement in local wind speed will counter the effect.

The share of stubble burning in Delhi’s PM2.5 concentration was 16 percent on Monday. It was 19 percent on Sunday and 9 percent on Saturday.

According to the Punjab Pollution Control Board, the state has recorded 14,461 incidents of stubble burning between September 21 and October 25 as compared to 9,796 during the corresponding period last year.

Haryana has recorded around 4,284 incidents of stubble burning this season so far.

The air quality warning system said the ventilation index – a product of mixing depth and average wind speed – was expected to be around 11,500 metre square per second on Tuesday — favourable for dispersion of pollutants.

The Centre had on Monday told the Supreme Court that it will bring a legislation to curb air pollution in the Delhi-NCR.

According to an analysis by the Council on Energy, Environment and Water, a Delhi-based think tank, transportation contributes the most — 18 to 39 per cent — to Delhi’s air pollution.

Road dust is the second largest source of air pollution in the city (18 to 38 per cent), followed by industries (2 to 29 per cent), thermal power plants (3 to 11 per cent) and construction (8 per cent). PTI