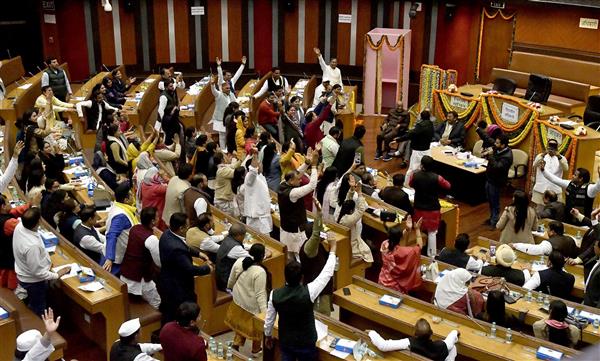 In spite of tight security arrangements, the election to the post of Mayor and Deputy Mayor of the Municipal Corporation of Delhi (MCD) couldn’t take place the second time.

The Pro-tem Speaker adjourned the House on Tuesday for an indefinite period after AAP and BJP councillors allegedly created ruckus in the run-up to the mayoral elections.

This is the second time that the election to the post of Mayor and Deputy Mayor had to be called off owing to the commotion in the House. On January 6, the Speaker had to adjourn the House after BJP and AAP councillors exchanged blows over the order of administering the oath.

In the MCD elections held on December 4, AAP had won 134 seats and the BJP 104. The Congress bagged nine seats in the 250-member House.

Before the House was adjourned today, the Pro-tem Speaker, who is a BJP councillor, administered oath to 249 councillors. The nominated members — also called as alderman — took oath as well.

As soon as the oath-taking ceremony was completed, councillors from both sides, AAP and BJP, started raising slogans. Subsequently, the Pro-tem Speaker adjourned the House sine die. However, AAP claimed its councillors did not indulge in sloganeering, and it was only BJP councillors who created the ruckus.

The AAP staged a sit-in protest in the House, and demanded that the House meeting should be reconvened today itself. Deputy Chief Minister Manish Sisodia told the media, “The BJP is running away from the elections to Mayor and Deputy Mayor. AAP councillors did not create any ruckus.”

Meanwhile, BJP MP Manoj Tiwari claimed AAP councillors abused BJP councillors. “AAP councillors were not letting the House be in order to conduct the elections. Consequently, the Speaker had to adjourn the House.”