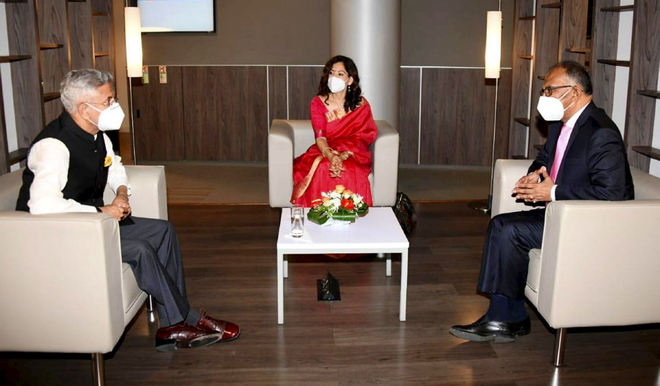 After concluding his two-day visit to Maldives, External Affairs Minister S Jaishankar arrived in Mauritius on Sunday on the last leg of his two-nation tour during which he will hold talks with the top leadership of India’s strategically key maritime neighbour in the Indian Ocean region.

Jaishankar, who will be in the country for two days, will call on President Prithvirajsing Roopun and Prime Minister Pravind Jugnauth — both of Indian-origin. “Namaste-Bonsoir Mauritius. Thank FM Alan Ganoo for his warm welcome. Look forward to a fruitful visit,” Jaishankar tweeted soon after his arrival here. He will also meet the minister of foreign affairs, regional integration and international trade and minister for land transport and light rail.

During his visit, Jaishankar will review all aspects of bilateral relations, ongoing implementation of various infrastructure projects being carried out by India in Mauritius, and hold discussions on bilateral, regional and global issues of mutual interest including India’s assistance to Mauritius.

Before leaving for Mauritius, Jaishankar reaffirmed its commitment to the Maldives’ security and signed a $50 million defence Line of Credit agreement with the strategically vital Indian Ocean island nation to boost its maritime capabilities. He also held in-depth talks with the country’s top leaders to further cement bilateral ties.

Jaishankar also witnessed the signing of a project execution contract for construction of roads in the southern-most island atoll Addu, which, he said, underscored the importance of connectivity in India-Maldives ties.

The last visit of an External Affairs Minister was in August 2018 when Sushma Swaraj visited Mauritius for the World Hindi Conference.

Mauritius PM Pravind Jugnauth last visited India on a private visit along with his spouse in December 2019, the visit being symbolic since it came just after his victory in the General Election. Both Maldives and Mauritius are India’s key maritime neighbours in the Indian Ocean Region and occupy a special place in Prime Minister’s vision of “SAGAR” (Security and Growth for All in the Region).

Reaching out via Vaccine diplomacy