Unusual mortality of birds reported in some districts of Jharkhand, Jammu and Kashmir 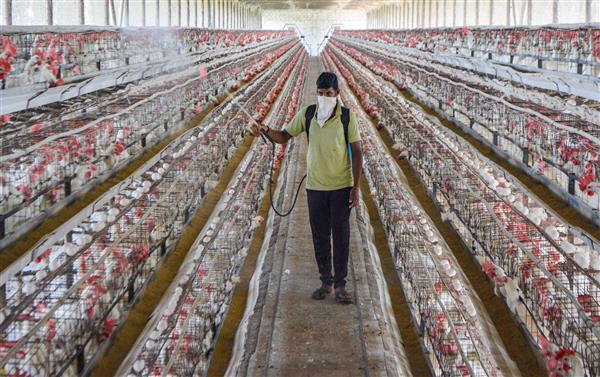 A worker sprays disinfectant at a poultry farm in Karad, Maharashtra. — PTI

Fresh bird deaths and avian influenza cases were reported in Uttar Pradesh on Wednesday, while in neighbouring Delhi, civic bodies banned the sale of poultry products, even as the city government asked people not to panic and eat completely cooked eggs and chicken.

Unusual mortality among birds has also been reported in some districts of Jharkhand and Jammu and Kashmir, as per a statement of the Union fisheries, animal husbandry and dairying ministry, which has asked state governments not to ban supply of poultry products.

However, bird flu outbreak has been confirmed only in Delhi, Uttarakhand, Uttar Pradesh, Kerala, Rajasthan, Madhya Pradesh, Himachal Pradesh, Haryana, Maharashtra and Gujarat till now, according to the ministry.

“Further, cases of unnatural mortality of birds have been reported in Ganderbal district of Jammu and Kashmir and four districts of Jharkhand,” it said.

Earlier, the Delhi government had imposed a ban on sale of processed and packaged chicken brought from outside the city, after bird flu cases were confirmed in the national capital on Monday.

The civic bodies through their veterinary services departments have also said that said owners of restaurants and hotels will face action if egg-based dishes or poultry meat and other products are served to customers.

In the past one week, Delhi has reported several bird deaths, including those of ducks at the Sanjay Lake and crows at city parks. Reports of over 50 bird deaths were also received on a helpline of the Delhi government’s animal husbandry unit on Tuesday.

The Delhi Health Department in its advisory in view of bird flu cases, asked people not to panic and follow a set of dos and don’ts, including not consuming half-cooked chicken, half-boiled or half-fried eggs.

“H5N8 is highly pathogenic in birds but the pathogenicity in humans as well as the likelihood of human infection with avian influenza (AH5N8) virus is low,” the advisory issued by the Directorate General of Health Services (DGHS) of Delhi stated.

“Eat only completely cooked eggs and poultry products cooked at 70 degrees Celsius for 30 minutes. Do not consume half-cooked chicken or bird or half-boiled and half-fried eggs,” the advisory said.

Do not keep raw poultry meat near cooked meat. Wash hands frequently at the time of handling raw poultry products. Take due care of personal hygiene and maintain cleanliness in surrounding, it cautioned.

In Uttar Pradesh, bird deaths were reported from Jalaun district and avian flu cases from Kanpur.

Samples taken from two dead crows in Kanpur have tested positive for bird flu and with these, the number of confirmed cases of the influenza has increased to four in the city, forest officials said.

In Jalaun, five birds, mostly crows, were found dead and their samples have been sent for testing, while in Fatehpur district two peacock carcasses were found in a forest. However, officials ruled out bird flu as the cause of death of the peacocks.

Chief Veterinary Officer Dr Rajendra Kumar Sharma said as per the postmortem report, the birds died due to cold.

In the wake of the bird flu scare in Maharashtra, Thane Collector Rajesh Narvekar has instructed the forest department to pay special attention to wetland areas for migration of birds in the district.

Seven rapid response teams have been deployed in the district and a control room has been activated to monitor the bird flu situation, he said during a review meeting with senior officials. PTI