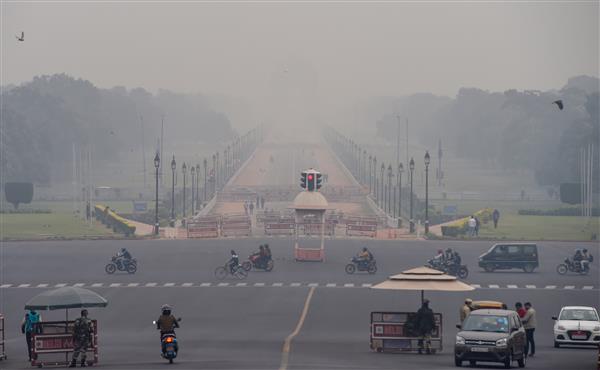 Vehicles ply at Vijay Chowk amid low visibility due to smog in New Delhi. PTI Photo

Delhi’s air quality improved to the “moderate” category on Friday morning due to favourable wind speed and is likely to get even better.

On Wednesday, the 24-hour AQI was 413, which falls in the severe category.

Stronger winds and a drastic reduction in the contribution of stubble burning were two major reasons for cleaner skies over Delhi.

VK Soni, the head of the India Meteorological Department’s environment research centre, said the wind speed remained favourable throughout the night, leading to a better-than-predicted situation.

The maximum wind speed is predicted to be 14 kmph on Friday, according to the India Meteorological Department.

The share of stubble burning in Delhi’s pollution has also reduced significantly as the harvesting season has ended.

The contribution of stubble burning in neighbouring states to Delhi’s PM2.5 levels was just 1 percent on Thursday and 2 percent on Wednesday, according to the Ministry of Earth Sciences’ air quality monitor, SAFAR.

Calm winds and low temperatures trap pollutants close to the ground, while favourable wind speed helps in their dispersion.  PTI