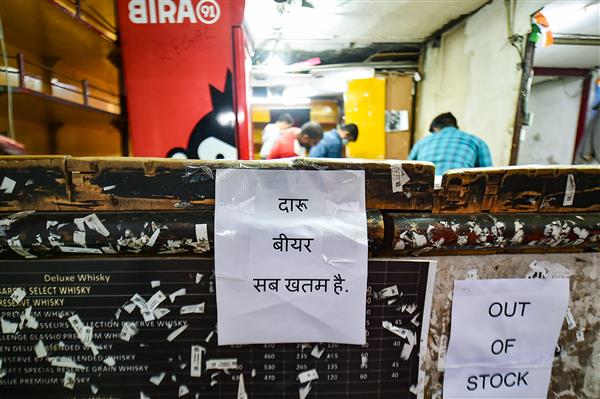 Notices read Out of Stock, at a government liquor shop after the government announced permanent shutdown of liquor shops as a new excise policy comes into effect, in New Delhi on November 16, 2021. PTI

With a new excise regime coming into effect in Delhi from Wednesday, swanky shops with walk-in facilities are being opened and restaurants will be serving liquor in bottles.

According to the new excise policy of Delhi, classy liquor vends will be set up in 32 zones across the city. One retail licensee will have 27 liquor shops per zone.

The new policy aims at revolutionising the consumer experience by replacing the existing liquor vends in the nooks and corners of the city with posh and stylish liquor stores spread over at least 500 square feet area with walk-in facility.

These shops will be spacious, well lit and air-conditioned.

People engaged in liquor trade expressed apprehensions over shortage of alcohol and possible chaos on the first day of the new liquor regime.

However, officials of the Excise Department said elaborate arrangements have been made to ensure people do not face any problem.

"We have given provisional licences to around 350 shops and registration of over 200 brands have been done with 10 wholesale licensees. The wholesale licensees have procured nine lakh litres of liquor of various brands so far," an official said.

He said licences have been distributed to all applicants in 32 zones but about 300-350 shops are likely to start operations on the first day of the new excise regime.

The new excise policy also allows the sale of liquor in bottles at restaurants.

The liquor will be served in glasses or full bottles at L-17 restaurants and it will be the sole responsibility of the licensee to ensure no bottle leaves the premises, the policy said. PTI