A woman is seen standing on the edge of the road as the SUV starts ramming the parked vehicles taking people by surprise, shows the video 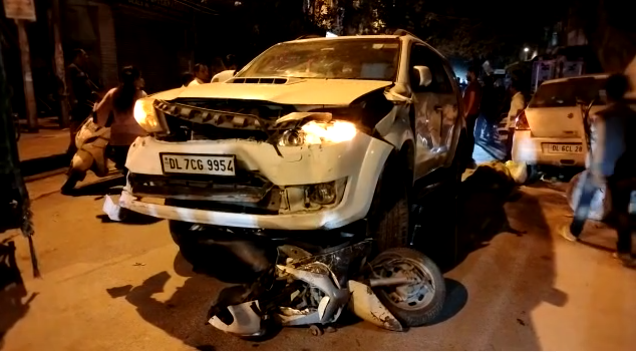 A 19-year-old man was injured after a car rammed into his bike in central Delhi's Karol Bagh on Monday, police said.

After hitting the bike, the car hit several other vehicles parked on the side of the road, police said, adding that the driver, identified as Sudhir Jain, was apprehended from the spot.

The accident was captured on a CCTV camera.

Two allegedly 'Drunk Youth in a Fortuner' hit around 500cars and dragged one scooter up to 100mtrs, grievously injuring the rider in Delhi's Karol Bagh.#Delhi @dtptraffic @DelhiPolice pic.twitter.com/a5Us1kJzrw

A Toyota Fortuner rammed a series of stationary vehicles and also dragged a man for about a hundred metres, showed surveillance cameras.

A woman is seen standing on the edge of the road as the SUV starts ramming the parked vehicles taking people by surprise, shows the video.

The footage of the incident shows Jain's Fortuner car hitting the bike after which it rammed into three to four more vehicles.

Jain was sent for medical examination to ascertain whether he was under the influence of alcohol, the officer said.

Delhi BJP spokesperson Praveen Shankar Kapoor denied that Jain was a member of his party.

"He was a member of Delhi BJP's Traders' Cell around 2008-09 after which he quit politics and stopped taking part in the party programmes," Kapoor said. With PTI inputs