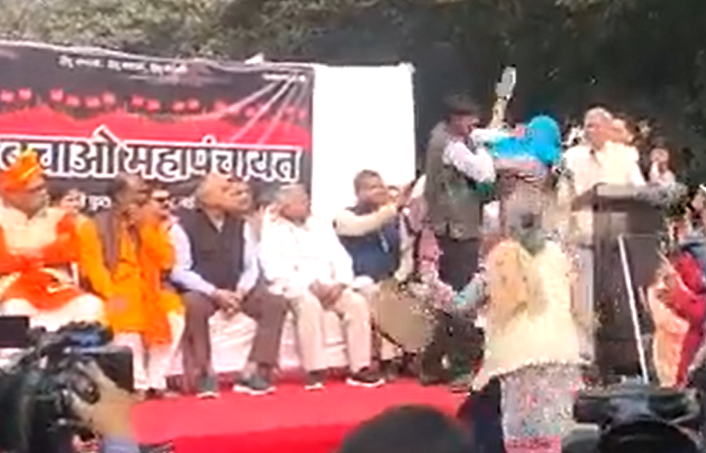 The woman hit the man standing near her with slippers. Photo Credit: Twitter

A video of a woman sharing stage with a man and later hitting him with slippers during an event hosted by Hindu Ekta Manch went viral on Tuesday.

The incident took place in south Delhi's Chhatarpur where the Manch was conducting a programme ‘Beti Bachao Mahapanchayat’.

The organisation, however, said neither the woman nor the man is associated with it.

In the video, the woman with her face covered can be seen climbing the stage and talking about her plight at the programme. She then started hitting the man standing near her with slippers. Others present on the stage intervened and tried to pacify her and she was taken off the stage.

The Hindu Ekta Manch clarified that it was a personal dispute and both the parties were related.

"It was a personal dispute. The man is not associated in any way with the Hindu Ekta Manch. The matter was resolved immediately. No police complaint was filed," Hindu Ekta Manch worker Laxman Singh said.

Giving further details about the incident, he said the women's daughter and the man's son recently got married in a court.

"The respective families were unhappy about the match, but later agreed and even exchanged sweets. But I do not know why she went on the stage. As the event was for women, we allowed her to speak. The man, who is a social worker, assisted her, but she started assaulting him," Singh said.

The event was organised to demand justice for Shraddha Walker who was brutally killed by her live-in partner Aaftab Poonawala.