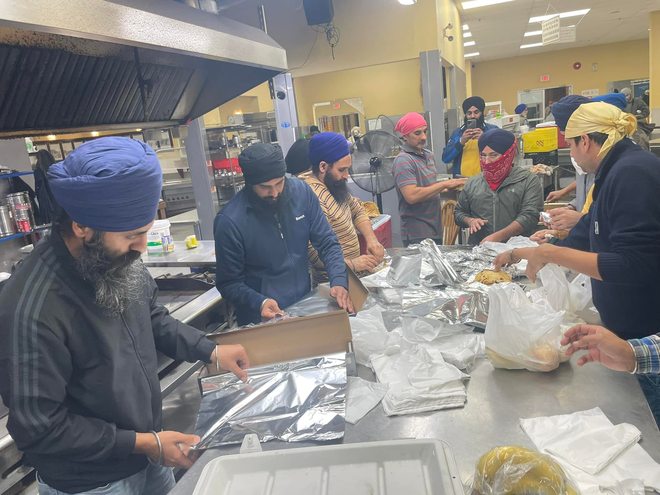 After massive floods devastated the British Columbia province in Canada, the Sikh community has come out in support of the affected people by way of providing food and other essential commodities to people.

Volunteers from Surrey's Dukh Nivaran Sahib Gurdwara are pulling out all the stops to make sure people stranded by washouts, mudslides and floods don't go hungry. They are even renting out a helicopter to deliver meals and other supplies to affected communities.

In Surrey, volunteers at Gurdwara Dukh Nivaran Sahib cooked more than 3,000 meals for travellers who were stranded in Hope because of the double mudslides that came down on Highway 7. The meals were shipped by a helicopter as per volunteer Amarjit Singh Dhadwar.

Dhadwar, a former truck driver, says his friends called him and told him they were stuck, so he and other volunteers swung into action. "It's in our blood. The Punjabi and Sikh community is always ready to help others.” Narinder Singh Walia, the gurdwara's president, said, “There are so many people stuck due to floods and landslides, they have no food. We are trying to reach them with food and blankets and other stuff. Volunteers at the gurdwara say the air operations will continue until roads are passable, and then deliveries will continue by truck."

Khalsa Aid Canada volunteers in Kelowna, Kamloops and in Metro Vancouver are cooking meals for stranded truckers in Princeton and sending supplies to Hope and Spences Bridge. Baljit Lally, the Lower Mainland coordinator for Khalsa Aid, said when they heard the food was running out for 200 truckers stranded near the Hope airport, they reached out to the Khalsa Darbar temple in Vancouver that mobilised volunteers from to cook meals.