Coronavirus: NRIs visiting Punjab stay put, as do those planning to come 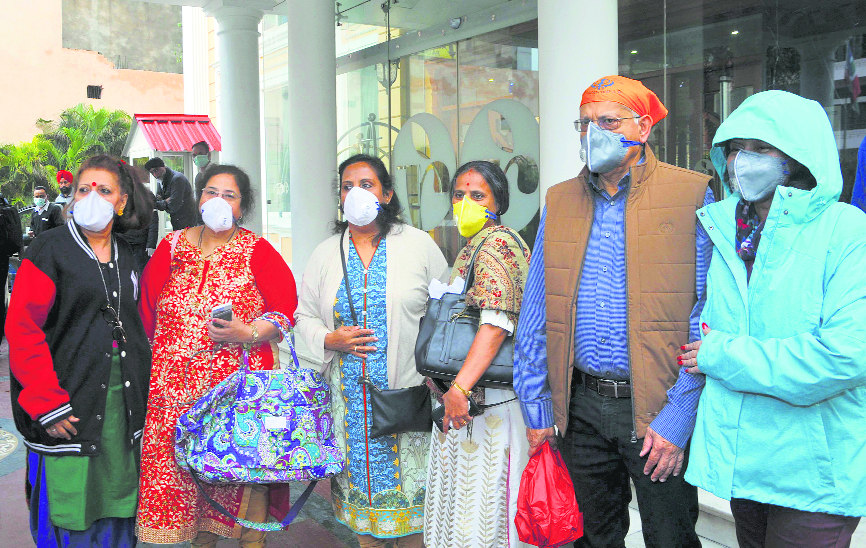 It was supposed to be a spring vacation for travel freak couple Amit Taneja and Monika Taneja and their children as they were to head to New York on March 3. As the kids’ school session had just got over, Jalandhar-based Tanejas had planned to take them to a host of tourist sites and catch up with their extended family settled in the US during the 15-day break. But the entire plan went haywire in the wake of panic over the spread of coronavirus.

“I feel it was a wise decision. There is no point travelling amid so much scare,” says Amit. All his NRI relatives, too, have shelved their plans to come to India, “My Surrey-based uncle, who had his flight booked for March 26, has got it cancelled. My Vancouver-based cousin, who was to be here for a wedding, is skipping it. Another friend, who was in Kapurthala and was to leave after construction of his house, advanced his tickets to New York by 22 days.”

More than the Indian tourists, it is the NRIs who are affected. Currently at their native places in Doaba region of Punjab, there are many who have chosen to extend their stay here. Though most of them hail from the US, UK and Canada, they said they were avoiding travel as they were scared of catching the respiratory infection from other tourists at the airport.

Tara Singh Gosal, a Calgary-based NRI, said, “As many as 15 persons from my family are at our native home in Nawanshahr. We were to return on March 2 but we cancelled our flights as everyone advised us to take precaution. Everyone’s work is getting affected, but we have no choice. We will leave only after the virus threat subsides.”

Kulwant Singh Mahal and wife Bhagwinder Kaur, who are currently at their native Kot Fatuhi village of Mahilpur (Hoshiarpur) and were to go back to Milpitas city in California, have deferred their plans to return. “We will now go only after the Covid-19 threat goes off.”

Now that they are stuck here, NRIs are staying away from crowded places and gatherings in Punjab too. Most elderly NRIs have especially chosen to put off their travel for a longer period because they have been warned that aged people with a chronic history of diabetes, heart problems, high BP and compromised immunity are more prone to the infection.

They are also sceptical about quarantine policies upon arrival, which could lead to their isolation and confinement for 14 days at hospitals. There are monetary issues involved as well, as some of them have got refunds from airlines upon cancellation but many have been denied. Also, all direct flights have become very expensive.

Several international conferences are being postponed. Prof Lakhwinder Pal Singh from Dr BR Ambedkar National Institute of Technology, said he had been invited to Dubai for a conference where he was to receive an award, besides presenting a paper and chairing a session. But he received a communication that the conference had been cancelled and it would now be held on virtual mode. “They sent me the award by mail asking me to send soft copies of Power Point presentations which would be shown in an e-conference.” Another professor from the same institute who was to go to Bangkok for a conference on chemical engineering too received a cancellation notice. Director, Public Relations from Lovely Professional University, Aman Mittal said he cancelled his Europe trip last week.

For tourism and airlines companies, there has been a complete slump. Amir Hussain, director of sales and marketing, Dream Fly Vacation, said, “Our business has fallen badly with most customers either cancelling or postponing their travel plans. Our company was taking two big corporate trips — one of 195 persons to Dubai and another of 90 members to Sri Lanka. Both have been cancelled. We had made advance payments for hotel bookings and cannot refund the money. Even though April, May and June are peak travel months, there are no fresh queries for advance bookings. People are on a wait-and-watch mode.”

Traders who had been importing material from China are looking for other possible sources. Amit Sehgal, president of the Phagwara Gate Electrical Goods Market Association, said, “Some dealers would earlier go to China to buy new stuff but no one is now even thinking of travelling. Supplies from China have been curtailed. There is a spurt in the prices of electrical items as a result. The prices of LED bulbs have already shot up by 10 per cent. The prices of spare parts like pumps used in coolers and fan bearings have gone up by 20-25 per cent.”

Most students who were to join the March intake in foreign colleges and universities have left for their respective countries, but as cities and educational institutes shut down across the world, their parents back home are anxious.

Son of Inderjit Paintal, a businessman from Jalandhar, is pursuing an undergraduate course in the Netherlands and he is understandably worried. “There have been 10 deaths and 800 positive cases in the country so far and his college has been closed till March 31. Initially, we wanted him to return, but now feel it would be better if he stays put and socialises as little as possible. He has also stocked rations for two-three weeks,” he said, and added: “Our fear is what if the countries themselves shut the door on students.”

Three positive cases at Oxford University have got Rajwinder Kaur, mother of student activist Gurmehar Kaur, who is pursuing a PG course there, worried. “I have been calling her daily and telling her to exercise precaution. She was planning an air trip, but I have told her to not travel at all.”

Students who were to join summer courses are equally worried as the spread of virus has jeopardised both money and opportunity. Sukhwinder Khaira, a Jalandhar-based businessman, said the Covid-19 scare has upset their plan to send their daughter Gursimrat for a course in computer sciences to Canada. “She was to leave on March 15 but we have got it cancelled. Her special summer session starts on May 4. She is a bit upset, but since she has permanent residency, she can, hopefully, still avail her chance in a few months,” he said.

However, Dalit writer Des Raj Kali said that his only advice to his daughter, who works at a mall in Dubai, is: “Do not panic and lead a normal life.”