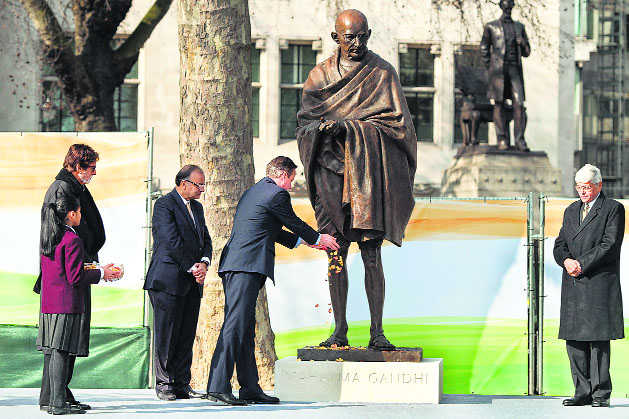 There are fears that statues of Winston Churchill and Mahatma Gandhi in the UK could be toppled after both were named in a Welsh government report reviewing historical figures as “complicit” in colonialism and slavery.

The report said that “many reputations have been brought into question” and “there is a need to assess the culpability or otherwise of individuals who are publicly commemorated and celebrated”.

This comes amid the Black Lives Matter protests and brings into question the reputation of the former wartime Prime Minister Churchill and civil rights leader Gandhi.

Churchill, which has two buildings and 15 streets named in his honour, had been found to be “widely hated in South Wales mining communities for his actions as Home Secretary during the Tonypandy riots”, the report said.

The report added that Churchill “expressed a belief in the superiority of the Anglo-Saxon race”, was “opposed to dismantling the British Empire”, and failed “to take sufficient action to relieve the Bengal famine”.

Gandhi has been implicated for “racism against Black South Africans”.

“An audit of memorials in Wales has assessed the historical figures they celebrate for ‘culpability’ in the slave trade, imperialism and racial bigotry,” The Telegraph reported.

Leading the audit, Gayor Legall told The Guardian that some contentious memorials “could be moved to museums so people can see the links”.

“I don’t see the point of destroying things, there’s enough death and destruction around as it is,” Andrew Roberts, author of “Churchill: Walking with Destiny”, said, adding: “It’s rare for quite such a level of ignorance to be squeezed into one single paragraph, but the Welsh Government has exceeded itself in the bilge it has regurgitated about Winston Churchill.”

“Churchill did not order troops with bayonets into Tonypandy. Nor did any of Churchill’s actions make the Bengal Famine worse than the typhoon had already made it,” Roberts said and added that the Welsh government had authorised “tripe posing as history”. IANS