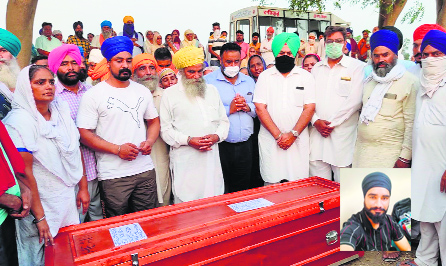 The body of 27-year-old youth Jobandeep Singh (inset), who died in Saudi Arabia, arrives at Mattewal village near Amritsar.

The body of 27-year-old youth of Mattewal village, who died in an accident in Saudi Arabia, arrived at his village last night.

SP Singh Oberoi, founder, Sarbatt Da Bhala Charitable Trust, said Jobandeep Singh had gone to Dubai about three years ago to work as a labourer to improve the economic condition of his family. While working as a driver with a Dubai-based company, Jobandeep went to Saudi Arabia on his truck. On May 20, the front tyre of his truck exploded and the vehicle turned upside down. Jobandeep died of serious head injuries. The family members of Jobandeep and Majitha MLA Bikram Singh Majithia had contacted Sarbatt Da Bhala Trust and told about the incident. Following the poor financial condition of the victim’s family, Majithia asked them to assist in transporting the body back home. Oberoi said after contacting the Indian Embassy in Saudi Arabia, the officials in the embassy sent Joban’s body from Saudi to Delhi via Dubai yesterday, after which it was further transported to Mattewal, the native village of Joban.

Oberoi assured the victim Joban’s family that they would do their best to pay the relevant amount of insurance to his aggrieved parents.

The trust has also decided to provide a monthly pension to the victim’s family.