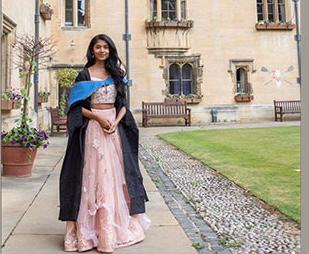 The story of a grandfather and his granddaughter have been doing the rounds on the internet after Juhi Kore, a graduate from the University of Oxford with a master's degree in Comparative Social Politics penned down a note on her LinkedIn.

The heart-touching note went viral in which she narrated the struggles of his grandfather from attaining education to how his dream became a reality in her. 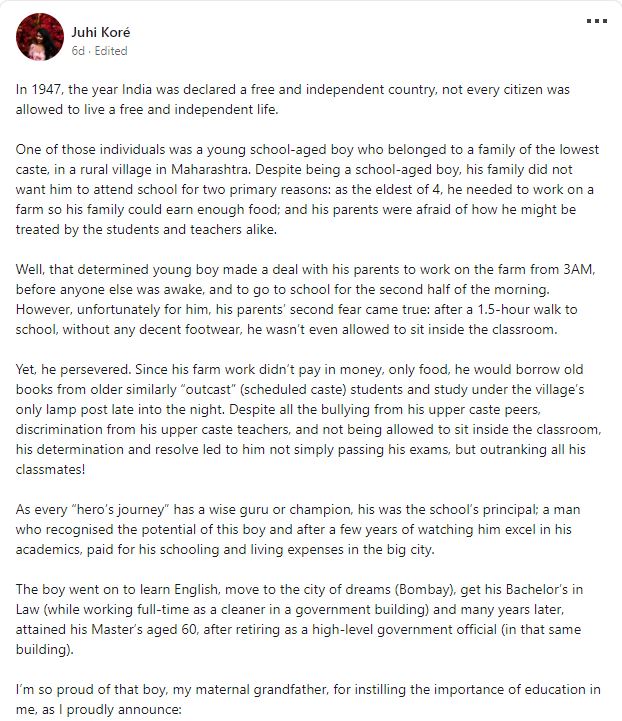 Her post reads, "In 1947, the year India was declared a free and independent country, not every citizen was allowed to live a free and independent life. One of those individuals was a young school-aged boy who belonged to a family of the lowest caste, in a rural village in Maharashtra. Despite being a school-aged boy, his family did not want him to attend school for two primary reasons: as the eldest of 4, he needed to work on a farm so his family could earn enough food; and his parents were afraid of how he might be treated by the students and teachers alike." When determination meets hard work this happens. She added, that her grandfather made a deal with his parents to work on the farm from 3 AM, before anyone else was awake, and to go to school for the second half of the morning. However, unfortunately for him, his parents' second fear came true: after a 1.5-hour walk to school, without any decent footwear, he wasn't even allowed to sit inside the classroom.

Juhi continued, "Yet, he persevered. Since his farm work didn't pay in money, only food, he would borrow old books from older similarly "outcast" (scheduled caste) students and study under the village's only lamp post late into the night. Despite all the bullying from his upper caste peers, discrimination from his upper caste teachers, and not being allowed to sit inside the classroom, his determination and resolve led to him not simply passing his exams, but outranking all his classmates!" She recalled, "every "hero's journey" has a wise guru or champion, his was the school's principal; a man who recognised the potential of this boy and after a few years of watching him excel in his academics, paid for his schooling and living expenses in the big city of Bombay.

Juhi's grandfather learned English, got his Bachelor's degree in Law, while he was working full time as a cleaner in a government building. As it is said that age is just a number, she shared, "many years later, attained his Master's aged 60, after retiring as a high-level government official (in that same building)." Expressing how proud she is, Juhi said, "I'm so proud of that boy, my maternal grandfather, for instilling the importance of education in me, as I proudly announce: I have graduated with my Master's from the University of Oxford!" She remembered the excitement of his grandfather when she got the master degree. "Every vegetable seller and corner shop worker in his neighbourhood had heard the news."

Unfortunately, Juhi lost him over a year ago. Reffering to this, she continued, "we weren't able to realise our shared dream of him attending my Oxford graduation ceremony in person. But I know he was watching over me fondly. In just two generations, he turned his reality of not being allowed to sit inside the classroom to having a granddaughter walk through the halls of the best university in the world. I'm so proud of him and I hope he's proud of his legacy." As soon as the post was uploaded, the netizens flooded the post with comments. Check out.

This sweet story of a grandfather and his granddaughter touched and inspired netizens.