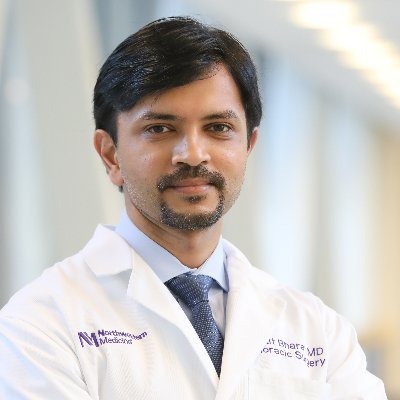 Surgeons led by an Indian-origin doctor have given a new set of lungs to a young woman with severe lung damage from the coronavirus, a surgery believed to be the first of its kind in the US since the pandemic began.

Northwestern Medicine in Chicago said the recipient was the woman in her 20s who would not have survived without the transplant.

She is in intensive care and recovering from the operation after being on lung and heart assistance devices for two months, The Washington Post reported.

Ankit Bharat, chief of thoracic surgery and surgical director of Northwester’s lung-transplant programme, said organ transplantation may become more frequent for victims of the most severe forms of COVID-19.

“This is one of the toughest transplants I’ve done,” he said. “This was truly one of the most challenging cases.” Meerut-born Bharat said.

The disease caused by the new coronavirus most commonly attacks the respiratory system but also can inflict damage on kidneys, hearts, blood vessels and the neurological system.

“I certainly expect some of these patients will have such severe lung injury that they will not be able to carry on without transplant,” said Bharat, who performed the operation on Friday.

“This could serve as a life-saving intervention,” the paper quoted him as saying.

The patient, who has not been publicly identified, was on immunosuppressant medication for a previous condition when she contracted the coronavirus, he said.       Perhaps for that reason, the virus devastated her lungs, leaving physicians few options, it said.

She developed secondary bacterial infections that could not be controlled by antibiotics because her lungs were so badly damaged, he said.

As the woman’s lungs deteriorated, her heart also began to fail, followed by other organs that were not receiving enough oxygen.

She was placed on a mechanical ventilator to help her breathe and later an extracorporeal membrane oxygenation device, which adds oxygen to blood outside the body and helps the heart pump blood through vessels.

Doctors repeatedly tested fluid from her lungs to be certain she was negative for the coronavirus before operating, Bharat said. By that time, she was even sicker, he said.

The woman spent just two days on the waiting list before an appropriate brain-dead lung donor was found, Bharat said. Only a small percentage of donor lungs meet the standards for transplantation, and at first, the woman's physicians were not sure these would qualify, Bharat said.

Surgeons in Austria on May 26 performed the world’s first known lung transplant to save the life of a COVID-19 survivor, a 45-year-old woman stricken with a severe form of the disease.

Bharat said he and others in his field are not aware of another organ transplant of any kind in the United States involving a recipient who had contracted the coronavirus.

The United Network for Organ Sharing, a non-profit that coordinates transplantation in the United States, has no record of an organ transplant into a COVID-19 patient as of May 29, spokeswoman Anne Paschke said.

However, hospitals have two months from the date of surgery to report a transplant to the Richmond organisation, she said.

The median life of a double-lung transplant was about nine years before the organs must be replaced, but experts have seen transplanted lungs function much longer, Bharat said.

“We are one of the first health systems to successfully perform a lung transplant on a patient recovering from COVID-19,” CNN quoted Bharat as saying.

“We want other transplant centres to know that while the transplant procedure in these patients is quite technically challenging, it can be done safely, and it offers the terminally-ill COVID-19 patients another option for survival.” PTI