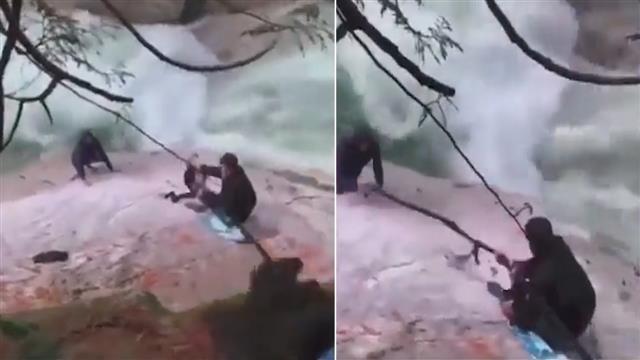 It was quick thinking and selflessness by a group of Sikh men in Canada that saved two lives by using their turbans to pull out the men who had slipped into freezing waters at Golden Ears waterfall.

Just before a rescue team could reach the location, a group of five men rendered aid to the men by taking their turbans off, tying them together and making a long rope and helped save their lives from the river in spate.

A video of the incident on Monday, in which five Sikh hikers tied their dastaars (turbans) together to save a man who had slipped and fallen at the Lower Falls at Golden Ears Park. Video courtesy @globalnews

Kudos to these young men on their quick thinking and selflessness. pic.twitter.com/XQuX27OH5i

Kuljinder Kinda was hiking with four friends in Golden Ears Provincial Park in British Columbia when they came across two men who had slipped on a rock and fallen into a pool below a waterfall, reports Global News.

The footage of the incident has gone viral after Kinda shared it on WhatsApp and it made its way to hiking groups on social media platforms like Facebook.

He told NBC News that the stranded hikers initially asked them to call emergency services, which they could not do because they did not have cell phone service.

"We were trying to think how we could get them out, but we didn't know how to," said Kinda. "So we walked for about 10 minutes to find help and then came up with the idea to tie our turbans together."

A video shows them working together to make a rope by tying their turbans together to pull the two hikers to safety. "Between your jackets and turbans, you were very resourceful! Well done on saving someone's life!" wrote one Facebook user.

"These men are heroes," another remarked.

“The absolute kindness of strangers. This was against these Sikhs' faith to remove their turbans but obviously they all agreed to this excellent idea to rescue this man. I hope this story makes the news too,” tweets someone.

Robert Laing, the search and rescue manager at Ridge Meadows Search and Rescue, was also among those who praised the group of friends. Laing was on duty when the accident occurred and reached the scene shortly after Kinda and his friends had already rescued the hikers.

"I've never heard of anything like this before and it was quite impressive," he told Global News.

Laing also pointed out that the rescued hikers had missed several signs that warned people to stay away from the waterfalls. The waterfalls are behind a fenced area, he pointed out.