'We're all shattered': Loved ones, community hold vigil for slain Sikh family in US : The Tribune India 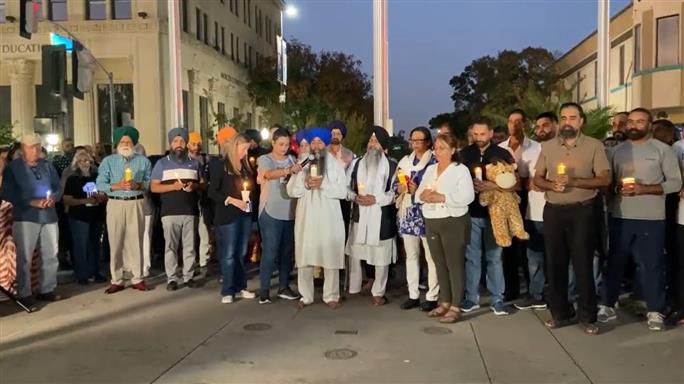 Hundreds of people in the US city of Merced prayed with candles in their hands and tears in their eyes during a sunset vigil for the grieving Indian-origin Sikh family, including an eight-month-old baby, who was kidnapped and then killed by a former employee.

Bodies of 36-year-old Jasdeep Singh, 27-year-old Jasleen Kaur, their eight-month-old child Aroohi Dheri and the baby's uncle, 39-year-old Amandeep Singh were found on Wednesday evening in an orchard after they were kidnapped on Monday.

The family, originally from Harsi Pind in Hoshiarpur, Punjab, was kidnapped at a business in Merced County, California.

The city of Merced has organised a candlelight vigil for the family every night at 7 pm from October 6 to October 9.

The crowd that gathered in the stately downtown Bob Hart Square on Thursday came from all backgrounds — young, old, Latino, Black, Sikh, white, wealthy, low income and stood in solidarity with the Singh and Kaur families at the vigil. They chanted prayers in Punjabi, Spanish and English, the San Francisco Chronicle reported.

There have been lives that have been taken, Lord, innocent lives, and we don't understand,” Christian Life Center Pastor Ceasar Johnson boomed to the crowd as he wept openly. “Comfort us, Lord,” the report said.

Sukh Bela, a friend of the slain family, said he and the tightly knit Merced-area Sikh community will be leaning on their faith in the coming days and weeks. But he added that the healing they hope to find will be made stronger by the support reflected in the sea of faces at Thursday's gathering.

“We're trying to hold true to three tenets of our faith,” he told the crowd. “Meditation... staying in high spirits... justice and prosperity for everyone. We thank you for being here,” Bela said.

There was a huge memorial of candles, flowers, pictures and stuffed animals at the sunset vigil.

“Taken 2 soon,” read one sign near an unopened package of a Barbie doll dressed in a pink party dress, the likes of which little Aroohi will never get to wear. “Together we are stronger,” read another sign.

The suspect in the killing of the family had once worked for the family's trucking business and had a longstanding dispute with them that got "pretty nasty" and culminated in an act of senseless killing, authorities and a relative said.

"They're going to need our support, our help, and we ask the community to stay with us, help us, help them," family friend Ranjeet Singh said.

Merced Mayor Matthew Serratto said it was important to come together as one community and support those who are grieving, the report said.

"We're standing up against evil," Serratto said. "We're on your side, and we're honoured to have you in our community, and you're treasured, valued members of our community. Your pain is our pain, and we're going to work as hard as we can to keep you safe." Thursday night's vigil was the first of four that will happen each night at Bob Hart Square in Merced.