Blot on US democracy

President Trump deserves to be prosecuted 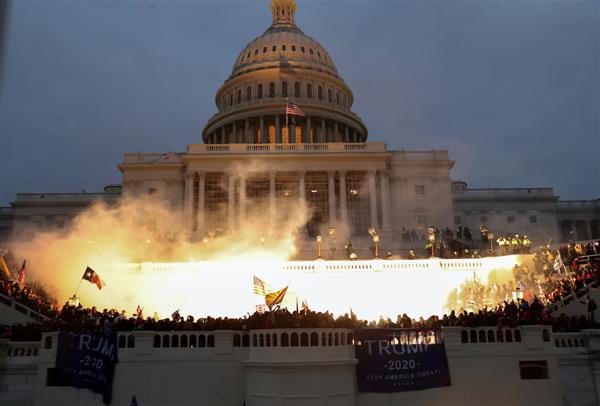 AN attempted coup, a failed insurrection or mob madness, however it gets labelled for posterity, the attack on the United States Capitol will remain a blot on American democracy, for it was instigated by President Donald Trump through his speeches and tweets full of lies, disinformation and fake news. He is solely responsible for the death of four and injury to scores of rioters, whom he unleashed in an attempt to derail the joint session of the Congress certifying Joe Biden’s presidential victory. An institution’s strength lies in its permanence and equally in the impermanence of individuals who hold power for fixed tenures. The office of the US President will overcome this temporary loss of glory on January 20 when Trump makes way for Biden, for which upholders of institutional integrity should be applauded.

First among those to restore order was US Vice President Mike Pence, who called in the National Guard and returned to the dais of the Senate to reconvene the Congressional proceedings and count the votes. He told Trump’s thugs, ‘You didn’t win.’ Equally strong was the condemnation by the Republican Senator and Chairman of Senate Committee on Judiciary, Lindsey Graham, who said, ‘Count me out. Enough is enough.’ Many Republican Congressmen have not just proclaimed Biden the legitimate President of the US, but have also denounced Trump by voting against his objections to the election process.

This attack against the American bicameral legislature was fuelled by fake news and conspiracy theories spread over social media; thus, it is a fearsome trailer of new media’s potential to distort public opinion through white lies. Even the presidential election result of 2000 was challenged and was settled only after a US Supreme Court verdict, though it triggered works like The Best Democracy Money Can Buy by Greg Palast. While a book illuminates, a tweet incites, as discovered by Twitter and Facebook, which belatedly suspended Trump’s account for 12 hours. The National Association of Manufacturers, a pro-Trump lobbying firm, and many others have termed the mob attack seditious and asked Pence to invoke the 25th amendment to sack Trump. He deserves to be prosecuted.