In the eye of the storm

Cyclone Amphan is about disaster preparedness 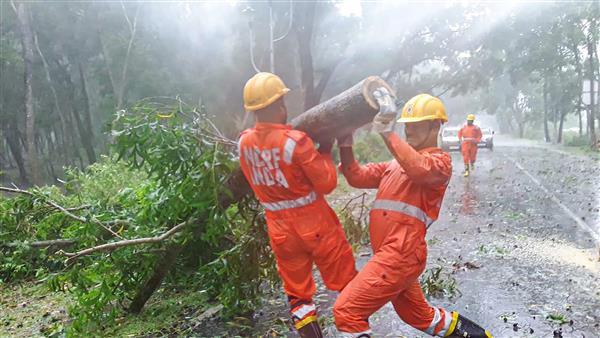 As cyclone Amphan ripped through east India, forcing the evacuation of nearly five lakh in West Bengal and about two lakh in Odisha, affecting countless others besides causing widespread devastation and disrupting life in general, the lesson from this disaster is obvious — it is better to anticipate such exigencies to prevent the loss of life and property. Relief and rescue operations have been mounted in the two states with West Bengal witnessing the death toll in double digits. Amid the trail of destruction, the one solace is the comparatively less number of deaths since the Odisha super-cyclone that claimed over 10,000 lives in 1999. Timely and accurate forecast, besides advance deployment of the NDRF, is attributed as the reason behind the timely evacuation of people. Additional teams of the NDRF have now been sent to West Bengal, affected badly, to speed up restoration work.

The FCI has been asked to ensure the availability of foodgrain — especially rice, a staple diet in the region — for those marooned. Work is on for early restoration of power and telecommunication services. Railway infrastructure has suffered damage and a process to restart its operations is on. The coastal areas have been a witness to raging cyclones from time to time, like Phailin, Hudhud and Titli. But the difference between these and Amphan is probably the fact that the authorities have been able to evacuate a large number of people this time.

Odisha learnt its lessons in 1999. The damage is restricted to agriculture and no loss of life has been reported. It has built roads, bridges, embankments, shelters and communication links. After the super-cyclone, the state has worked to prepare a culture of disaster preparedness. The integrated test range at Chandipur is also reported to be unaffected by the storm. This time, the pandemic has made the efforts more arduous as it involved sanitising cyclone warning centres and ensuring social distancing. Both Amphan and Covid convey that early warning can help mitigate damage in such cases, an idea which both PM Modi and CM Mamata Banerjee should find agreeable.