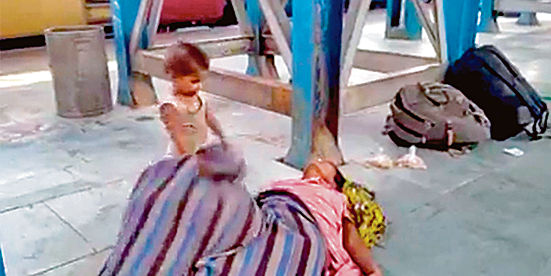 EVEN after death, it seemed she was watching over her two tiny tots, one barely walking. The mother of Muzaffarpur, lying dead on the railway platform with nobody to mourn or cremate her, has replaced all other metaphors of misery of the migrant labourers during the Covid lockdown. She still remains nameless; the politician who tweeted the video clip of a toddler trying to wake up his dead mother did not care to find out her name or whereabouts. All that we know from news reports is she was travelling in a Shramik train from Surat in Gujarat to Katihar in Bihar. In the past couple of days, five others have died in Shramik trains, one of them a four-year-old child. Some say they have died of exhaustion, dehydration and hunger, but the Railways insists that they had pre-existing conditions. The migrants who travelled in cement mixers and crossed the Yamuna on tyre tubes have survived, but not these unfortunate passengers of Shramik trains, which strayed from their stipulated routes without food or water in the peak of summer.

The host states did not care for these men and women, forcing the Supreme Court to order them to ensure food, shelter and transportation. The home states, after initially trying to push them back, are now indifferent to the plight of those returning in desperation — dead or half dead. Well, nothing much was expected of the home states, but the hosts should remember that their farms and factories would need the migrant labourers sooner than they would have imagined. Some of the employers have already announced doubling of salaries and other incentives. If only they had the wisdom to see the tragedy while it was unfolding.

The Central government, meanwhile, has woken up to have an updated Code on Social Security. This is part of a policy initiative to redefine ‘migrant workers’ aimed at getting them access to the social security cover under the Employees’ State Insurance Cooperation. If the new code offers a strong social security net for the migrants with monetary and health benefits, it would assuage their deep distress to some extent.