India should be receptive to forging beneficial alliances 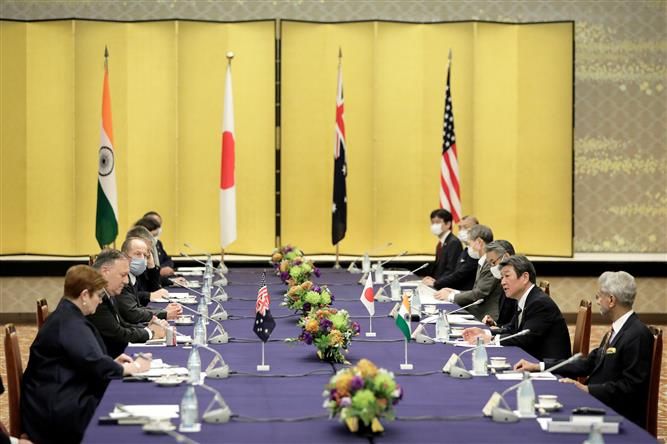 Multilateral alliances have become a geopolitical necessity in a multipolar world. Like other countries, India wants to safeguard its strategic and economic interests, but at the same time the importance of long-term cooperation with like-minded partners, especially in a post-pandemic world, cannot be undervalued. The emergence of Quad, which comprises India, the US, Japan and Australia, made New Delhi feel confident that it had a key role to play in the scheme of things. However, this grouping is now apparently being overshadowed by AUKUS (Australia-UK-US). America is also keen on a quadrilateral framework featuring Pakistan, Uzbekistan and Afghanistan. Thus, India can neither afford to confine itself to one alliance nor take any such arrangement for granted.

Yet another Quad is taking shape as the Foreign Ministers of India, the US, Israel and the United Arab Emirates (UAE) held a virtual meeting. India’s Foreign Minister S Jaishankar is presently on a five-day visit to Israel — his third trip to that country in the past four years. The establishment of diplomatic relations between Israel and the UAE last year, facilitated by the US, has opened a major window of opportunity for India as it enjoys friendly ties with both nations. Israel’s Foreign Secretary Alon Ushpiz has made it clear that Tel Aviv envisages a greater role for India in the ‘dramatically changed’ landscape of the Middle East.

Indeed, New Delhi has a lot to gain from any alliance that bolsters regional connectivity and cements economic partnerships. However, it would be naive of India to view any existing or emerging Quad as a bulwark against Chinese aggressiveness. The benefits accruing from multilateral tieups won’t translate into military strength on the ground. Wedged between two hostile neighbours, India should be open to forging more alliances that can help it gain diplomatic heft on the international stage. New Delhi also needs to dispel the impression that it is merely toeing the American line on strategic relationships. Charting its own autonomous course, while focusing on trade expansion and people-to-people ties, should be the way forward for India.