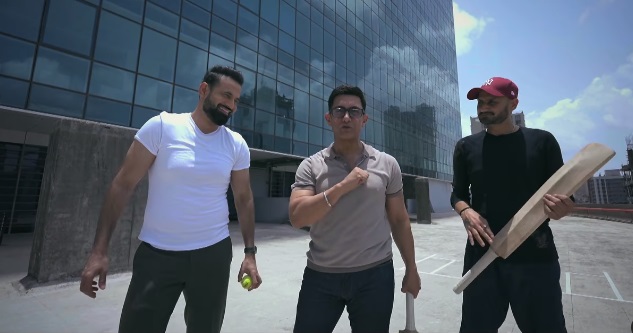 When it comes to Aamir Khan’s films, the pre-release excitement that the actor builds is no less than a film-worthy subject itself. Known to employ some really out-of-the-box ideas to promote his upcoming projects, Aamir is back in the game. Quite literally!

With his much-anticipated Laal Singh Chaddha around, trust him to come up with something quirky.

There is a new video shared by Star Sports India on its Instagram account. In the video, Aamir Khan says he is ready to prove his prowess as a cricketer. Aamir is flanked by former Indian cricketers Irfan Pathan and Harbhajan Singh.

Aamir, in the video, says, “Friends, the time has come. Now I will prove to these two that I am a cricketer and they will request me ‘please, please, play cricket in our teams.”

The caption reads, “#AamirKhan is out to prove his worth as a batsman to our experts @irfanpathan_official & @harbhajan3! Can his batting win them over to make the duo go #AamirInMyTeam? Stay tuned to know what happens next! @aamirkhanproductions.”

Now, going by Aamir Khan’s style, this looks like a teaser for something big, may be around Laal Singh Chaddha or maybe it’s a new project that the actor is about to start. Let's wait for the next on this.

Laal Singh Chaddha is a Hindi remake of Tom Hanks-starrer Forrest Gump directed by Robert Zemeckis. It stars Aamir Khan and Kareena Kapoor. The film will release on August 11.