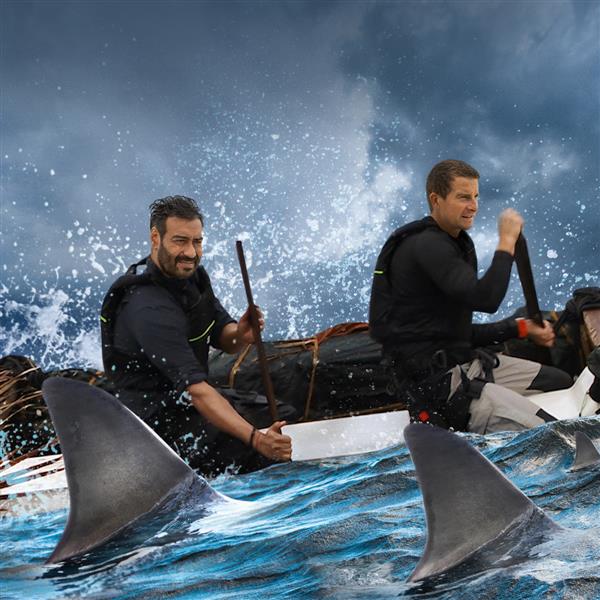 ‘If you see a shark, stay calm’... Is born survivor Bear Grylls’s tip to Ajay Devgn, as he appears on the show Into The Wild with him. Shot amidst the majestic Indian Ocean, they not only beat the challenges, but cemented a bond they intend to cherish for life. Impressed by each other’s humility, they opened up on their adventure and love for nature.

“In my childhood I didn’t get enough of nature,” admitted Ajay Devgn, not too happy with city life, but glad that the shoots filled that void! Ajay’s son Yug, a huge follower of Grylls, wanted to accompany him but since that was not an option, Ajay got a video message from the famous British adventurer!

Amazed to see the ‘unglossy’ side of the Bollywood hero, Grylls calls Devgn humble, honest, determined and calm. “Nobody can prepare for adventure, but power to stay unshakable through it all is tough,” said Grylls, who along with his fondness for Devgn, is equally fond of India for its natural diversity and hospitable people. For Ajay this was an unparalleled adventure. “I knew absolutely nothing about it, I just followed Gryll. During shoots, one has rehearsals and retakes, but none of that happens when one is facing natural elements,” said Ajay and added he was nervous before each shot. He had so much fun that Ajay has decided to take every nature holiday with Grylls now! The fondness was mutual as Grylls addressed Ajay as ‘My dear friend Ajay.”

Even their love for food is common. As much as Grylls likes the Indian curries, he found it too hot at times. Now a stickler of British version of Indian cuisine, he banked on Ajay for recommendations. As for the show, Grylls said,:“It was a privilege to know Ajay’s warrior spirit, humble heart and family love.” As for Ajay, he added, “I had a lot of fun; it was all unpredictable, but I am happy I made a friend.” Before Ajay, Prime Minister Narendra Modi, megastar Rajnikanth and Akshay Kumar have appeared on the show. The show will be premiered on Discovery+ on October 22.