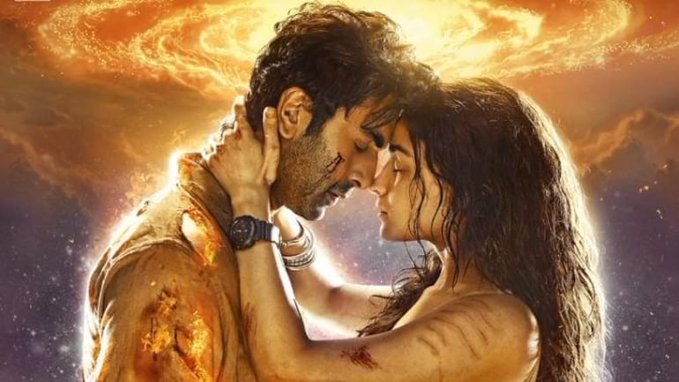 Ranbir Kapoor, Alia Bhatt-starrer is expected to break into the Rs 100-crore club at the end of its first weekend. Twitter

This seems to be the unanimous view of trade magazines that track box-office collection figures. According to 'Bollywood Hungama', early estimates indicated that the Ayan Mukherji movie has collected in the range of Rs 36.50 crore to Rs 38.50 crore on its opening day.

The Rs 415-crore movie therefore seems set to break into the Rs 100-crore club at the end of its first weekend, but its big test will be Monday.

If it can keep up the momentum, then it promises to become the highest-grossing Bollywood film in a rather difficult year. In fact, according to 'Bollywood Hungama', its first-day earnings have surpassed those of the biggest post-pandemic grosser, the Akshay Kumar and Katrina Kaif-led 'Sooryavanshi'.

But with no major release being scheduled before the upcoming actioner 'Vikram Vedha' starring Hrithik Roshan and Saif Ali Khan on September 30, 'Brahmastra' has an unobstructed ride ahead. Will it be able to cash in on this fact?

Trade analysts have said that four factors seem to have buoyed the movie's reception: it Ayan Mukerji shared this on his Instagram:

has brought back young people, who have now become avid followers of Marvel film, to the cinemas after a long time; stellar performances, especially by Alia Bhatt, who seems to have literally become the darling of audiences; the surprise package, namely, Shah Rukh Khan's 20-minute presence in his 'Swades' character, Prof. Mohan Bhargav; and of course, the VFX that brought Ayan Mukherji's Astraverse to life.

More importantly, it has done well in both urban multiplexes and 'mass belts'. "The film has fared exceptionally well in the multiplexes and the mass belts too stood their ground with spot bookings," 'Bollywood Hungama' states. "The three national chains have collected around Rs 18.50 crores from all the versions, whereas the non-national chains have put up another Rs 18.50 crores to take the opening around Rs 37 crore mark."

Interestingly, the non-Hindi versions, too, have brought Rs 5 crore to the film's initial kitty. And the occupancies are averaging between 40 per cent and 50 per cent in cinemas across all territories. If this good run continues, then Karan Johar and Ayan Mukherji may have finally delivered to Bollywood the winner it so badly needed.