Lyricists have raised the pitch for giving credits to their songs. And rightly so 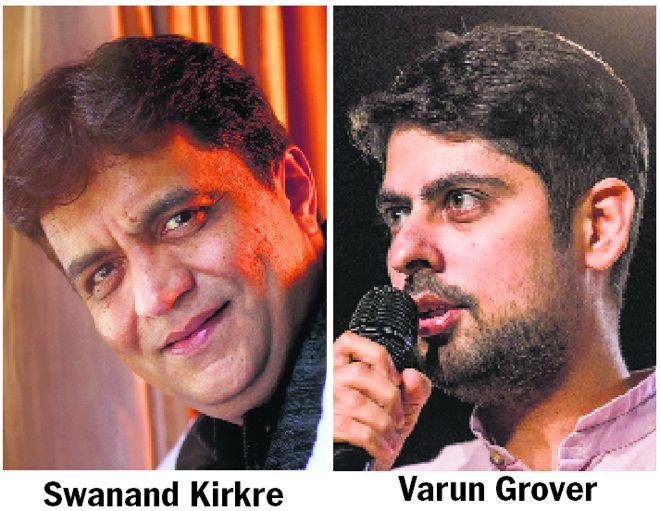 What’s in a name? Everything say lyricists and songwriters of Bollywood, who are demanding that streaming platforms and music apps should give them due credit for their works. Leading from the front are Varun Grover and Swanand Kirkire, who have been vocal about the negligence towards lyricists’ credits. The lyricists claim that credits are mostly not given on digital platforms, and in some cases when these are given, the names of lyricists are incorrectly spelt.

Varun, who has given lyrics for films like Masaan, Gangs of Wasseypur, besides scripting Sacred Games, says, “We had been raising the issue on various platforms for the past three years. It was becoming repetitive but no one was listening. We realised that we needed to do something more to catch everyone’s attention.” To amp up this fight, Varun, along with Kausar Munir, came up with a song “Credit de do yaar,” which has become the lyrics writers’ anthem. Striking an instant chord with the viewers, the song received nearly 2.5 lakh views in less than a week of it being uploaded on YouTube. Fifteen contemporary lyricists came together to perform the peppy number, which has been sung by Swanand Kirkire. Besides the above three lyricists, the song features Shellee, Amitabh Bhattacharya, Neelesh Misra, Manoj Muntashir, Mayur Puri, Kumaar, Sameer Anjaan, Anvita Dutt, Raj Shekhar, Puneet Sharma, Abhiruchi Chand and Hussain Haidry. It has been composed and produced by Chinmayi Tripathi and Joell Mukherjii.

“Writing songs is our forte. Now we needed to write a song for our cause. Kausar and I consciously choose to make it a fun song. The tone has been kept light-hearted since we didn’t want to add to the cynicism of the times. We are happy that it has caught everyone’s attention, and we are getting support from all around,” says Varun, who adds that he was an ardent reader of The Tribune during his growing up years in Sundernagar, Himachal.

The voice of this protest song, Swanand Kirkire, needs no introduction. According to the actor-singer, who has penned memorable lyrics like “Behti hawa sa tha woh” (3 Idiots), “Bande mein tha dum” (Lage Raho Munnabhai), “Till we were buying tape recorders, there was a method to give credit to the lyricist. But when we shifted to the digital format, music companies on various streaming and music apps stopped giving us credit. Streaming platforms like YouTube, and music apps like Spotify, Gaana, JioSaavan, and even Apple music don’t have a method of giving credit to the lyricists. These apps, which mostly came from the West, recognise singers, and even music composers, as artistes but there’s no format to give credit to the lyricists. In the West, usually the singer is also the lyric writer. However in India, the lyric writer, composer and singer are mostly different persons. The streaming app companies need to understand this difference and change their algorithm to include credits for lyricists as well.”

Kausar Munir, whose songs are said to weave magic, refuses to call this a fight and prefers to describe it as a “campaign, a happy demand, a gentle persuasion”. “Of the two primary creators, the composer and the lyricist, often the latter is neglected. Getting credit for one’s work is a given, and one should not have to ask for it,” says Kausar, who has penned memorable songs for films like Ishaqzaade, Ek Tha Tiger, Dhoom 3, Bajrangi Bhaijaan and Dear Zindagi.

Reacting strongly to this unfairness, Chandigarh-born lyricist, poet and theatre artiste Shailender Singh Sodhi aka Shellee, feels that this culture of neglecting the lyricists needs to stop. “It’s sad that it took a song to bring out the injustice being meted out to lyricists for so long”, says the dialogue writer, who has given lyrics for films like Manmarziyaan, Udta Punjab and Phillauri. He vociferously demands, “Why should the lyricist’s name not be there in the credits? That too for a creation of his/her own. We are not asking for the moon. It’s our right.”

Narrating an incident of how when the famous duo Salim-Javed’s credits were missing in films posters, the two went all night painting their names on film posters pasted on walls, says Shellee, “For a lyricist, a credit line is the only way to get recognition. Financially, too, lyricists lose out on royalty when their name is missed out or incorrectly spelt in the credits.”

Be it gently, cajolingly or strongly, all the lyricists join hands for one demand: “Credit de do yaar!”