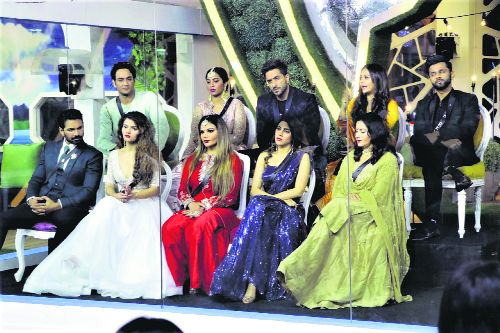 The four-month-long journey of entertainment, fun, fights and perseverance is coming to an end on February 21. The finale of Bigg Boss 14 will be celebrated with much fanfare. A host of film and television celebrities would be joining in. In several previous episodes of the show, the Garmi step of Nora Fatehi was performed by the host Salman Khan and the guests - Eijaz Khan and Raghav Juyal. But this time, Nora Fatehi herself will be on the stage to do the iconic step with Salman Khan. To add to the fun and excitement, Ritesh Deshmukh will be sent inside the house as Rakhi’s husband, Ritesh. Rakhi will be unaware of this prank so to expect some fireworks inside the house.

Later Ritesh will also join his friend Salman Khan on the stage. The entertainment meter will reach its peak when the king of romance Dharmendra will take on the stage. Madhuri Dixit along with her co-judges Tushar Kalia and Dharmesh and host Raghav Juyal will come to promote their upcoming show Dance Deewane. Many stars from different shows of Colors will entertain the audience with their performances making the finale a power-packed dose of entertainment!