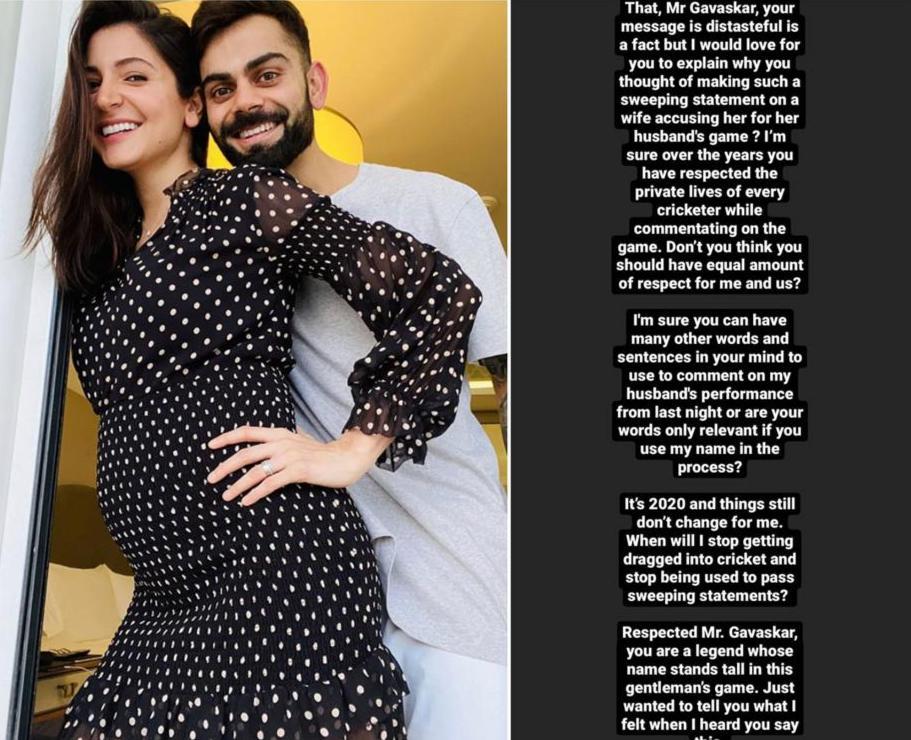 Gavaskar found himself in the midst of a controversy for making an unsavoury comment against Kohli and Sharma after the Indian captain's forgettable outing in the IPL match, held in Dubai.

Anushka, who has faced negativity and trolling in the past as well for Kohli's performance, said she was tired of being dragged into cricket.

"It's 2020 and things still don't change for me. When will I stop getting dragged into cricket and stop being used to pass sweeping statements?" the actor said in a long statement posted on her Instagram Stories.

Gavaskar was a part of the commentary team as Virat Kohli-led Royal Challengers Bangalore lost to Kings XI Punjab on Thursday night and the Indian captain did not do well in the match.

Referring to a video of Kohli and Sharma playing cricket during the country's coronavirus lockdown, Gavaskar, in the commentary box had said: "Inhone lockdown me toh bas Anushka ki gendon ki practice ki hai, (he has only faced Anushka's bowling in lockdown)".

In her statement, 32-year-old actor, who has accompanied Kohli in Dubai, asked for an explanation from Gavaskar for his comments.

"That, Mr Gavaskar, your message is distasteful is a fact but I would love for you to explain why you thought of making such a sweeping statement on a wife accusing her for her husband's game?

"I'm sure over the years you have respected the private lives of every cricketer while commenting on the game. Don't you think you should have equal amount of respect for me and us?," Sharma said.

The actor in her concluding note, said, "Respected Mr Gavaskar, you are a legend whose name stands tall in this gentleman's game. Just I want to tell you what I felt when I heard you say this." In the past as well, Sharma has reacted sharply to her name being dragged into cricket.

In October last year, she had shut down reports that claimed that selectors were asked to serve her tea during ICC World Cup 2019.

“I have stayed quiet through all the times I was blamed for the performance of my then boyfriend, now husband Virat and continue to take the blame for the most baseless things involving Indian cricket. I kept quiet then,” she had written.

“Today. I have decided to speak up because someone's silence cannot be taken as their weakness," she had said at the time. PTI