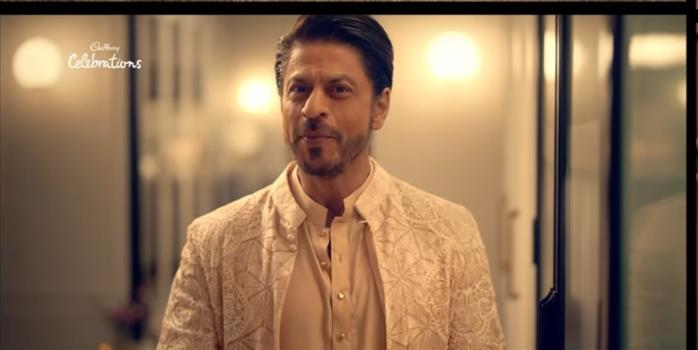 A still from the video. YouTube/Cadbury Celebrations

Come October and the first sign of festivities begin not just by the well-lit, crowded markets but also those heartwarming ads on our television sets by Cadbury. Living up to the annual tradition, this Diwali the confectionery brand has decided to do something for the local businesses by making superstar Shah Rukh Khan their brand ambassador. The ad acknowledges that the small businesses and local stores have been hit hard by the covid-19 pandemic.

The ad begins with a voiceover that says,  “Big businesses and brands that suffered during the pandemic found their way back but the smaller stores still suffer.”

In the 2.18-minute clip, we get to see many shopkeepers and small business owners which then takes the focus on Shah Rukh Khan promoting local cloth merchant, shoe shop, electronic store and the nearby kirana shop. As begin the smiles and that warm feeling of Diwali celebrations, the ad goes on to explain that it is ‘Not Just A Cadbury Ad’. It says, “Last year we helped small business through Diwali so this year we decided to bring it back.” How, the ad tells. “By making India’s biggest brand ambassador be their brand ambassador.”

The ad has used machine learning to recreate Shah Rukh Khan’s face and voice to take the local store names in ads. This means different versions of the same ad can be created therefore promoting local stores. It explains the process as it goes, “Since it is not possible to cover every local store, we give the power to the people to create their own version of not just a Cadbury ad. Any small business owner could promote their stores through their own social media networks.”

It then shows a happy shopkeeper saying ‘I can’t still believe that Shah Rukh Khan made an ad for my store. Visuals of small businessmen smiling leave you with a smile.

And as Shah Rukh Khan ends it, “The small stores around us deserve to have a Happy Diwali”.

Not a surprise that the ad has become viral. Impressed by Cadbury’s thoughtful initiative many people have shared it.

Not just a Cadbury Ad!

#ShahRukhKhan is the best metaphor we have for the Idea of India. And #Cadbury has proved that they are not just kuch meetha but also kuch khaas.https://t.co/ta8dYVCOpw

OMG - What a concept! What a campaign! What an ad! This is as heartfelt, emotional, real as it gets, and full marks to the creative team of #Cadbury and the man who is there in the middle of it all, @iamsrk, to have made this SO SPECIAL #NotJustACadburyAd https://t.co/0x2XLcWdOV

Another reason to love #cadbury and @iamsrk ♥️https://t.co/KKubjZTRVD

So #Cadbury does it again...
this time, with this King Of Hearts himself, @iamsrk promoting local shopping this #Diwali2021... Very Innovative, Very Thoughtful indeed ... #NotJustACadburyAd
💞🎉👏🏻💫🎊🌈💞💫🍫💥
👉🏼https://t.co/bs0JnmbB9s

This is not just a #Cadbury ad,
This is @iamsrk summed up in real life
He is simple,flawless,he has always been unpretentious, calm,real & someone who despite having a larger than Life fan base and humongous love,has always remained grounded & humble.#IStandWithSRK #ShahRukhKhan pic.twitter.com/VY9p4lFYwV