The movie was released on Netflix on August 12 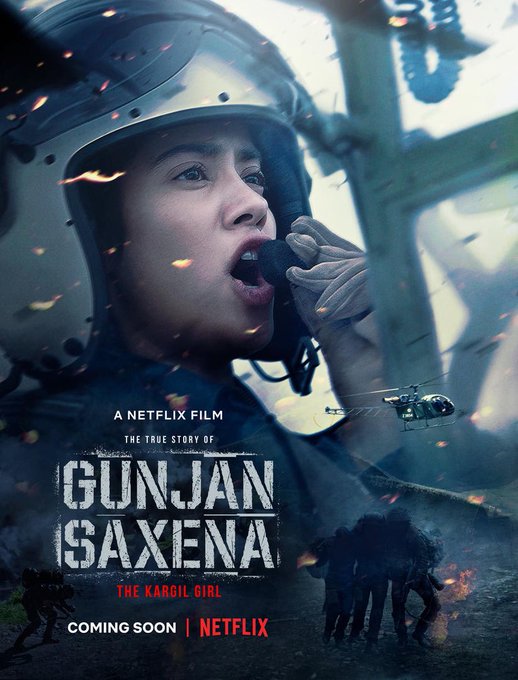 The Delhi High Court Thursday refused to pass any interim order to restrain the release of movie 'Gunjan Saxena - The Kargil Girl'—in theatres and asked the Centre which alleged that the film depicts the Indian Air Force in poor light, to sort out issues relating to its content with the producer and director.

The movie was released on Netflix on August 12 and was likely to hit theatres which have opened from Thursday after being shut due to coronavirus pandemic for over six months.

According to the Centre, the film which was streaming on Netflix, depicts the Indian Air Force (IAF) in poor light and dents its image.

Justice Rajiv Shakdher asked Additional Solicitor General Sanjay Jain, who was representing the Centre, to sit with counsel for other parties including senior advocate Harish Salve for Dharma Productions, senior advocate Rajiv Nayar for director Karan Yash Johar and senior advocate Neeraj Kishan Kaul for Netflix and try to sort out the issue.

The judge, who refused at this stage on the Centre's plea to restrain release of the movie in theatres, said those who wanted to watch the film have already seen it on over the top (OTT) platform.

“Who will go and watch a movie in the theatre at the time of COVID-19 pandemic. Those who wanted to see the movie have already watched it on the OTT platform,” the high court said.

It listed the suit for further hearing on January 18, next year after the counsel for all the parties suggested the judge to first watch the movie so that their arguments can be more clear.

During the hearing, Salve maintained that IAF was not shown in bad light in the movie and urged the court to watch the movie.

Jain, along with central government standing counsel Gaurang Kanth, submitted that IAF is an integral part of every Indian's day to day life and the film has distorted the image of the force in the name of cinematic work which cannot be appreciated.

“We do not have quarrel with the artistic work of Dharma Productions vis- a-vis it shows the personal life of former Flight Lieutenant Gunjan Saxena. Our concern is her interface with IAF, as shown in the movie,” he said.

Nayar showed the disclaimer mentioned in the movie which states that it is inspired by the events based on the life of Gunjan Saxena.

The court asked the Centre to make a clip of the scenes with which it has a problem.

The court has also sought response of the parties on the interim application seeking interim injunction to remove the movie from all OTT platforms.

The Centre had said the movie has dented the image of the IAF as it showed that the force is gender biased, which is not correct.

The government has sought a decree of permanent injunction against the defendants from broadcasting or releasing in theatres or any other digital platform the film ‘Gunjan Saxena', without grant of no-objection certificate (NOC) from it.

The Centre, in the suit, said the IAF believes in gender equality and has always ensured a healthy working environment for all its officials, uninfluenced by their gender, caste, region, and religion and it has always provided equal opportunities to the meritorious officers.

The suit submitted that by changing the name of the movie from 'Kargil Girl' to 'Gunjan Saxena-The Kargil Girl', the nature of the film also got changed and transformed to a historical film on the Indian Air Force and a biopic on Flight Lieutenant Gunjan Saxena, who participated in the Kargil war.

It said a historical film made on the Indian Armed Forces based on the life story of a war hero has to be based on the true incidents/instances and the audience watching such a biopic film assumes that the events shown are actual and true.

The suit said it cannot be fictionalised or dramatised to such an extent where an entirely different perspective is created based on false and misleading facts/ events which leaves an adverse impression in the minds of the viewers thereby tarnishing the image of the true characters and the organization which is shown in a historical and biopic film.

It said as per the 2013 Guidelines, in case of biopics, the approval of the History Division of the Ministry of Defence is a mandatory condition. However, here the defendants changed the title of the film to project it as a historical and biopic film without authorities' approval. PTI