Hostages 2: Twists in the tale

The second season of Hostages 2, streaming on Disney Hotstar, holds your attention with surprising turns at almost every step 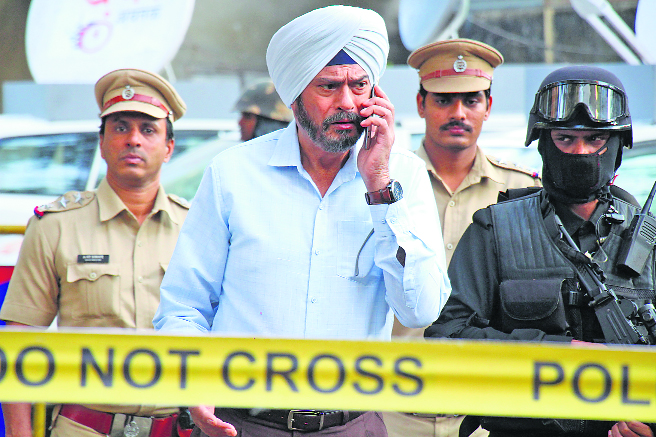 A still from Hostages 2

From one hostage drama to another, from one season to another, the scene shifts from plush residence of New Delhi to an old haveli in Haryana. Living up to its title once again, there is a hostage situation. Only it’s more a creation of circumstances rather than a simple tale of kidnappers holding people to ransom for money. Even though for a moment you are reminded of Spanish web series Money Heist. For, after all, kidnappers and hostages are holed up in a similar kind of fashion and surrounded by police too. Besides, there is a sick patient at hand, an impending operation and even a female negotiator.

But Hostages 2 is no Money Heist, as we know this adaptation of an Israeli series rather pans out in many directions. There are many angles to the storyline. From politics to corporate crime to a terror link, it’s a hydra with several tentacles, and much saps and much holds your attention.

To be honest, what happens far away from the haveli is far more intriguing than the goings on inside and outside the ancient haveli. Those familiar with Season one of Hostages are well clued in to the twists and turns the previous kidnap drama entailed. In case, you haven’t watched the first season we suggest read no further or at least watch the season one before tuning into the second one.

For the current season takes off exactly from where the first one culminated. The Chief Minister (Dalip Tahil), the country thinks is dead, but he is very much alive and taken hostage to ensure a bone marrow transplant for his illegitimate daughter. Sure not all characters of the previous season are part of the second outing. Certainly there is a degree of familiarity, but not one that would breed outright contempt. There are many fresh chapters and characters.

Dino Morea as the man who kills faster than one blinks an eye is as devilishly handsome as his sinister acts. Divya Dutta comes on hard (pun intended) in her introductory scene, but soon begins to fit into her part even though her superior’s (Kanwaljit Singh) open admiration for her work is kind of inexplicable. For, as a negotiator, she seems to be giving more than getting in return. Shibani Dandekar as corporate honcho ups the glamour quotient and you can only nod when Shweta Prasad Basu as a young intelligence officer gushes; she is hot. But things get really hot when the rookie officer takes upon herself to unravel a mystery behind a killing whose ripples can be felt all across.

Ronit Roy, Dalip Tahil and Mohan Kapoor take on from where they left in the first season and reprise their parts with the same consummate ease. Sudhir Mishra is the series director and Sachin Mamta Krishn credited as the director has the same fluent flourish. But does he take the second season a few notches above? Well, on emotional ground, ailing wife, harried husband, kidnapped daughter, and concerned friend, Hostages doesn’t really land well. Yet it’s high on thrills, especially in the manner in which it ropes-in and connects its new characters as well as rejigs a few old ones. While the epicentre might appear to be the kidnapping stage of haveli, it’s the other connections which are livewire. Jigsaw puzzle is laid out astutely, and the guessing game will keep you guessing and on tenterhooks too.

Actually, surprise elements are dime-a-dozen if not entirely convincing. Technically well-made, the writing has an edge. With short episodes of nearly half-an-hour each, the 12-episode season is an easy watch. Only, if it had not wrapped up as easily; ending on a far too convenient note, it ties up its many ends rather tamely. Nevertheless, for most parts it holds you captive.