Video: Kangana Ranaut had once called Ranbir Kapoor 'serial skirt chaser'; this was his 'joke' about her and Hrithik Roshan that left Katrina Kaif in splits : The Tribune India

Video: Kangana Ranaut had once called Ranbir Kapoor 'serial skirt chaser'; this was his 'joke' about her and Hrithik Roshan that left Katrina Kaif in splits 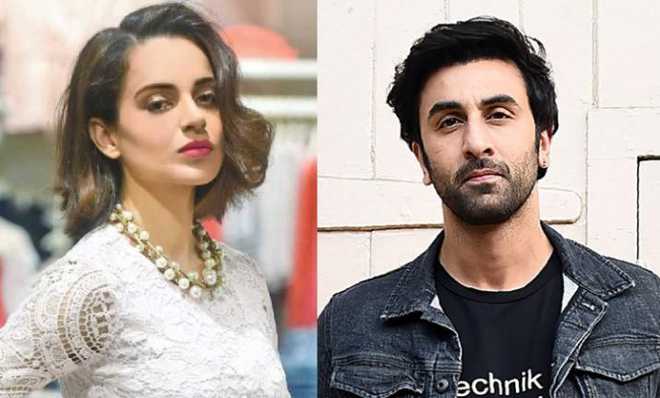 Actor Ranbir Kapoor, in 2020, was called a ‘serial skirt chaser’ by Kangana Ranaut.

She has attacked Ranbir on many other issues. Recently, an old video of Ranbir making fun of Kangana during a film promotion event has surfaced online.

The video is of the time when Ranbir was promoting the film Jagga Jasoos with actor Katrina Kaif, reportedly after their alleged break-up in 2017.

Ranbir was asked to play a game. In a clip shared, Katrina is seen holding photos of Bollywood celebrities as Ranbir tries to dance like them.

Katrina was told not to see the pictures and had to recognise the celebs based on Ranbir’s dance.

While, Ranbir copies the dance steps of 'Prem Ratan Dhan Payo' for Sonam Kapoor and 'Ek Pal Ka Jeena' for and Hrithik Roshan, he messed up when Katrina showed him Kangana’s photo.

He said, “Can I do this (dance like Hrithik) again?” He then did a throat-slitting action and Katrina instantly guessed it was Kangana, ending up in giggles.

Ranbir added a disclaimer to the camera: “Sorry Hrithik, I had to do this to win this game. I didn't mean it. I don't know what the truth is.”

Hrithik and Kangana Ranaut had sent each other legal notices in 2016, and since then they have engaged in direct and indirect fights

Ranbir woulld next be seen with wife Alia Bhatt in Brahmastra. The film releases on September 9.