The brand removed the tasteless shirts from their Etsy profile after backlash, and has taken a complete U-turn 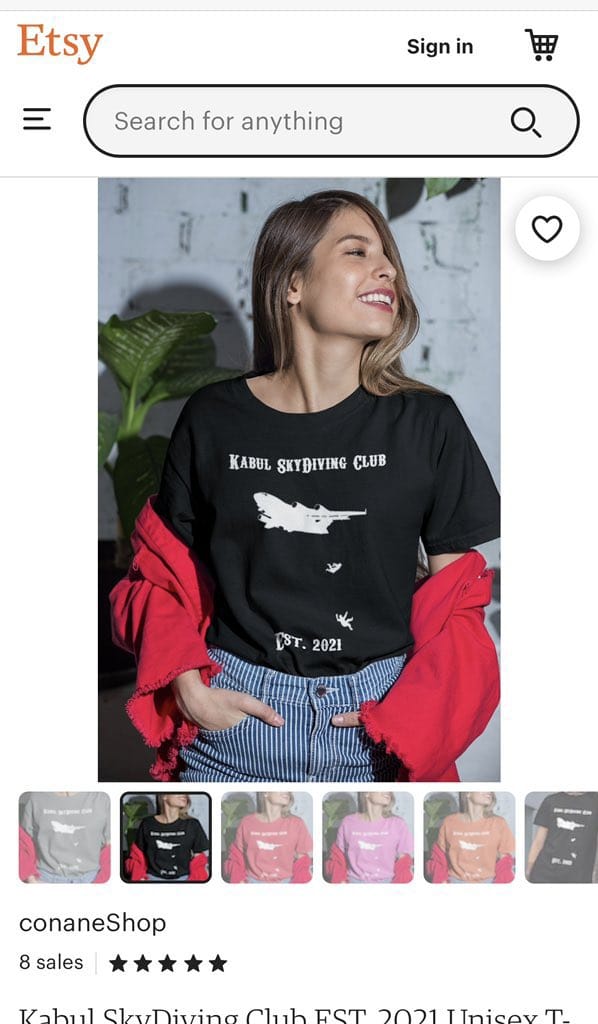 As the world watched in horror the scenes unfolding in Afghanistan after the Taliban took control of Kabul, thousands of hapless Afghans thronged the Kabul International Airport in a desperate bid to escape the country.

Several people were seen running alongside an American military aircraft taxiing for take-off, some clinging to its wheels – resulting in the death of at least two people, including a teenager footballer, as they fell from the sky.

Mocking the horrifying death of the innocent Afghans, tasteless t-shirts with the offensive message ‘Kabul Skydiving Club’ are available on Etsy, an American e-commerce company focused on handmade or vintage items and craft supplies.

The apparel available for both men and women in various colours, had silhouettes of two people plummeting from a US military aircraft with “Est. 2021” written at the bottom.

They company wants to be creative

Is it how you show your humanity?
Are you happy to see young Man died falling?
Is it celebrating time for you?
Answer the questions

@Etsy! Why do you sell t-shirts ridiculing #Afghans who have died falling off an airplane in @Kabul? pic.twitter.com/eYfptHBRBz

“This is disgusting. Not even a week and @etsy allows for the terror the US caused to be profited over w shirts.. mocking the deaths of Afghans desperately and humiliatingly attempted to flea Afghanistan by clenching onto an aircraft, falling to their deaths. @etsy you’re disgusting. Share and tag @etsy . Not enough was profited from Afghanistan the past 20 yrs? Tshirts? Mocking desperation and death? This is unacceptable,” an Instagram user wrote.

Hey @Etsy! Why do you sell t-shirts ridiculing #Afghans who have died falling off an airplane in @Kabul?

“Unbelievable how cruel and heartless some people can be,” a Twitter user commented.

The brand removed the tasteless shirts from their Etsy profile after backlash, and has taken a complete U-turn. In fact, instead of the insensitive texts on tee, the company has launched ‘Pray for Afghanistan’ T-shirts.

However, the T-shirts are available on many other websites for a “cheaper price”. The graphic design template is now available at several online clothing stores including TopTeeTrend, Gebli and TShirtAtLowPrice among others, some of which are also offering limited-edition apparels beyond T-shirts.