Ranbir Kapoor-Alia Bhatt are back from Italian babymoon; video inside : The Tribune India

Ranbir Kapoor-Alia Bhatt are back from Italian babymoon; video inside 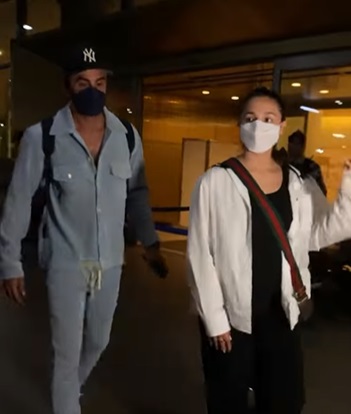 Ranbir Kapoor and Alia Bhatt at the Mumbai airport. Instagram/viralbhayani

After spending quality time with each other in Italy, lovebirds Ranbir Kapoor and Alia Bhatt are now back in Mumbai.

During the wee hours of Monday, the duo was spotted at the Mumbai airport. Like always, paps did not leave any chance to capture glimpses of the parents-to-be.

In the pictures, Ranbir and Alia are seen exiting the airport and making their way to their car. Ranbir, the doting husband, is seen protecting Alia as they head towards their car.

For the airport look, Alia wore an all-black ensemble with a white jacket and matching sneakers. Ranbir, on the other hand, opted for a blue shirt, matching pants, a cap and white sneakers. Both of them carried bags and wore face masks.

Ranbir and Alia, who are expecting their first child together, headed to Italy a few days ago. While vacationing in the European country, the 'Raazi' star gave fans a sneak peek into her adorable moments with hubby.

Taking to her Instagram handle, Alia dropped a video of Ranbir from their getaway. In the clip, Ranbir looked uber cool in a loose blue shirt with black shades. He also grooved to 'Deva Deva' song from 'Brahmastra Part One: Shiva' at a location surrounded by beautiful scenery.

The two are waiting for the release of their film 'Brahmastra', which is scheduled to hit the theatres on September 9. Amitabh Bachchan, Mouni Roy, and south actor Nagarjuna will also be seen in prominent roles in Ayan Mukerji's directorial.

'Brahmastra' is extremely special for Ranbir and Alia as the two fell in love with each other during the shoot of the film.