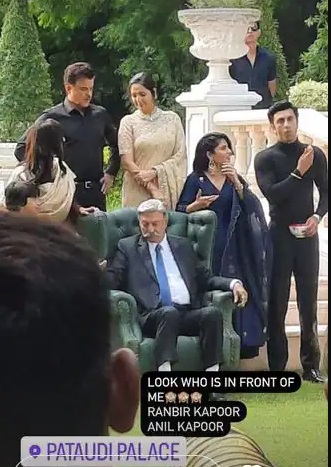 The team of Animal filming a scene at Pataudi Palace in New Delhi. Instagram/anamkhanmakeup

Photos from the sets of upcoming Animal starring Ranbir Kapoor, Rashmika Mandanna and Anil Kapoor were leaked online. In the photos, Ranbir and Anil Kapoor are filming at the Pataudi Palace, the beautiful family house owned by Sharmila Tagore and Saif Ali Khan. The viral photos have been shared by makeup artist Anam Khan and in them the cast of the film is dressed in formals. Both Anil and Ranbir are dressed in black while the actresses are wearing sarees. It seems to be an occasion shot of sorts in Animal and the lush green lawns of the Pataudi Palace makes for a great location.

In the photo, Ranbir Kapoor is enjoying a snack as he can be seen holding a bowl in his hand. Anam Khan, who shared the pictures, wrote, “Look who is in front of me – Ranbir Kapoor and Anil Kapoor.”

As the Animal team makes Pataudi Palace their home for the coming days, Rashmika Mandanna and Bobby Deol- who were not spotted in the pictures- are expected to join the cast.

Pataudi Palace is located on the outskirts of New Delhi and several films and series have been shot here before.

Coming back to Animal, the film is directed by Sandeep Reddy Vanga. A portion of the film was shot in Manali this April. Ranbir had joined the team right after his wedding with Alia Bhatt to complete the Himachal schedule of the film. On location picture of Ranbir and Rasmika, dressed in ethnic wear, had surfaced online.

Ranbir Kapoor will next be seen in Ayan Mukherji’s Brahmastra opposite wife Alia Bhatt. The film also stars Amitabh Bachchan, Nagarjuna and Mouni Roy. He also has an untitled Luv Ranjan film with Shraddha Kapoor. Anil Kapoor, on the other hand, has Fighter that also stars Hrithik Roshan and Deepika Padukone.