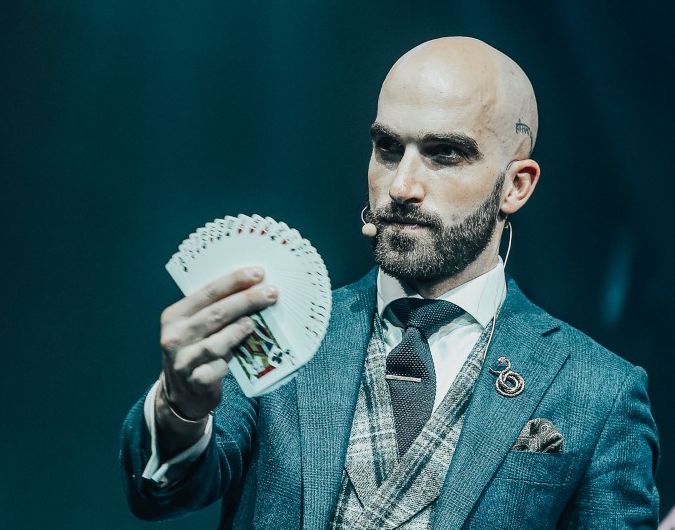 Coming from the financial dynasty of Coutts & Co, Drummond Money-Coutts (DMC) was destined to chart his own individual path. And today, DMC is ruling the world of magic.

This English specialist ‘card shark’, who started performing in school, is going strong, having completed almost two decades, but there is a lot he wants to explore still.

In the country recently, DMC finds Indian magic different, “Yahan jadu thoda alag hai.” DMC fell in love with magic when he was barely eight. His father took him for a show beneath the vaults of Coutts & Co. headquarters in London. So swayed was he with the experience that he decided to become a magician.

Drummond fondly recalls how during a conversation with his father while climbing a mountain in Africa, as a 19-year-old, he had told his Plan A, which was to become a magician, to him. On being asked about Plan B, he had said it was to make Plan A work!

Death By Magic on Netflix is one hair-raising show and Drummond admits it’s been ‘an incredibly difficult show to make’. “I didn’t know many of these stories of magicians having lost their lives in pursuit of creating that spectacle for the audience to enjoy.” Eight episodes, six of them back-to-back, Drummond never had any time to learn. “It was an incredibly dangerous show to make. The acts look incredible, but in magic one wrong move can spell doom.”

DMC’s India connect is strong and deep. He proudly supports the tattoo — Hausla Pyar Viswas. “There are three mantras that I adhere to in life — Hausla Pyar Viswas. This is my little piece of India that I carry with me; it’s very special,” says Drummond, who fell in love with India instantly. As an 18-year-old when he first came to India, he was mesmerised. “I landed in Delhi and felt my soul fill up with exoticism, mysticism and crazy energy. India adores magic, its mystical — so different from anywhere than world.” He also loves Indian cuisine, “Sab khana swadisht hai. I love everything; there is almost nothing about India that I don’t adore.”

In India, he finds a world within him. “I recently saw the movie Kedarnath and I would like to visit the temple. There is always another village, another town, another mountain; so many cultural experiences to explore in India. It’s too much for one lifetime, but I will try.”