Sacheen Littlefeather, who declined Marlon Brando's Oscar on his behalf, dies at 75 : The Tribune India

Sacheen Littlefeather, who declined Marlon Brando's Oscar on his behalf, dies at 75

She had been suffering from breast cancer 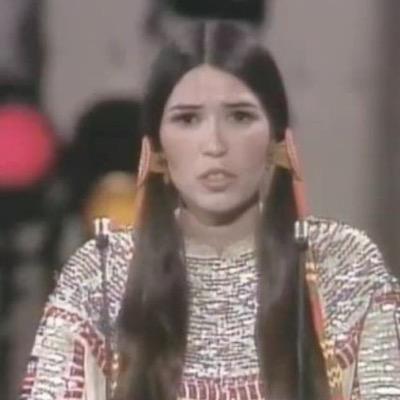 Actor and Native Americans activist Sacheen Littlefeather, who took to the stage at the 1973 Academy Awards to reveal that Marlon Brando would not accept his Oscar for ‘The Godfather’, has died. She was 75.

According to entertainment website Variety, she had been suffering from breast cancer.

The Academy of Motion Pictures Arts and Sciences, who issued an apology to Littlefeather after nearly 50 years and hosted a celebration in her honour just two weeks ago, also took to Twitter to mourn her demise on Sunday night.

Born Marie Louise Cruz in Salinas, California, to a Native American father (Apache and Yaqui) and European American mother in 1946, Littlefeather became interested in Native American issues in college and participated in the 1970 occupation of Alcatraz Island, adopting her name during that time.

After college, she joined the Screen Actors Guild and reportedly met Brando, who took an interest in Native American issues, through his "The Godfather" director Francis Ford Coppola who, like Littlefeather, lived in San Francisco.

Brando, who was the front-runner for the best actor Oscar for his career turnaround as the mafia patriarch Vito Corleone, boycotted the ceremony as a protest against Hollywood's portrayal of Native Americans and to draw attention to the standoff at Wounded Knee, in which 200 members of the American Indian Movement faced off against thousands of US marshals and other federal agents in the South Dakota town.

At the 1973 Oscars, Littlefeather took to the stage on Brando's behalf where she was only given 60 seconds to read her speech on Native American rights.

"He very regretfully cannot accept this very generous award. And the reasons for this being are the treatment of American Indians today by the film industry…and on television in movie reruns, and also with recent happenings at Wounded Knee," Littlefeather had said to the Academy Awards audience.

She was then escorted off the stage with audience members' response which was divided between boos and applause. Actors Raquel Welch, Clint Eastwood and Oscar co-host Michael Caine were among those who criticised the activist on camera for disrupting the ceremony.

Littlefeather was allowed to read her full speech at a later press conference and it was printed in the New York Times newspaper.

Although she had a few small roles in films such as ‘The Trial of Billy Jack’ (1974) and ‘Shoot the Sun Down’ (1978), Littlefeather said she was blacklisted from Hollywood in the aftermath of her Oscars address.

She later returned to San Francisco to continue her activism and work in theatre and health care.

In June, the Academy apologised to Littlefeather for her treatment at the Oscars that night. She attended an in-person presentation of the apology at the Academy Museum on September 17.

"The abuse you endured because of this statement was unwarranted and unjustified. The emotional burden you have lived through and the cost to your own career in our industry are irreparable.

"For too long the courage you showed has been unacknowledged. For this, we offer both our deepest apologies and our sincere admiration," then-AMPAS president David Rubin wrote to her in a letter dated June 18.

A documentary about her life and activism, titled ‘Sacheen Breaking the Silence’, was released in 2021.